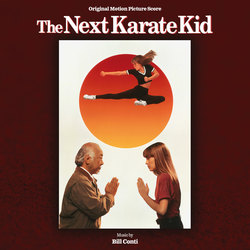 The Next Karate Kid

La-La Land Records and Sony Pictures proudly present the remastered and expanded reissue of acclaimed composer Bill Conti's original motion picture score to 1994's big-screen, The Next Karate Kid, the fourth chapter in the Karate Kid saga starring Noriyuki "Pat" Morita and Hilary Swank, and directed by Christopher Cain. Previously out of print, the energetic The Next Karate Kid kicks back into the arena, remastered and expanded, with all new packaging and exclusive, in-depth liner notes by writer Al Kaplan, including comments from the director and additional composer, William Ross.

Conti returns to the world of The Karate Kid , except this time, Daniel LaRusso has moved on and Miyagi is training a new student in trouble, Julie Pierce. Conti rises to the challenge, unleashing a rich score that reprises themes and ideas from the earlier films, while introducing new ones to define Julie's new lead character. Teeming with drama, wonder, action and heart, the music expertly propels the film and is a rewarding, dynamic listen. Produced by Neil S. Bulk, mixed by Michael McDonald, and mastered by Doug Schwartz, this limited edition CD release of 3000 units was sourced from studio vault elements and features a bounty of additional music tracks and alternate cues. The classic art design is by Dan Goldwasser.