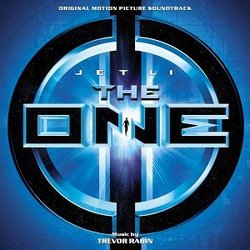 Let me be the first to say that I enjoy Trevor Rabin's work.  It's never been the most complexly orchestrated music, but for what it is, it works well.  Before I get started, I want to establish that I haven't seen the film, so my review is focusing on the music as a listening experience separate from the movie.  With The One, Trevor Rabin doesn't venture too far out of his circle of familiarity; taking his The Sixth Day and action approach, he combines edgy, high quality electronic samples with a 48-piece orchestra and some traditional, heavy "Rabinized" guitar stylings.  For the most part, it's an all-out action score - fast paced, with percussion interwoven throughout 90 percent of the album.  This leaves the listener with practically little-to-no room to breathe, but hey -  if that's your thang, strap in and get ready.

The first four tracks establish the atmosphere of The One.  For all intents and purposes, let's call this "Act One".  "The Ritual" is basically the fanfare for the picture.  Like most of the stuff on this disc, it's heavy on the percussion, but what separates it from the rest of the album, is Rabin's particular use of ethnic drums.  It works well and starts the album off with some punch, establishing the main theme (which isn't half bad).  We then move on to "Multiverse", which bleeds directly into track 3, "Growing Stronger", making it, for the purposes of this disc, one large cue.  I have no idea if it's presented this way in the film, but it works well here.  Starting off pretty tame, Rabin plays with an ascending motif first heard in the "The Ritual."  But soon after we've moved into "Growing Stronger", which is probably the heaviest track on the disc, featuring some of Rabin's most thrashing stuff to date.  "The Light" is a nice atmospheric track, employing a new motif that'll be heard later in the album.  It's this track that makes me wonder if this is the kind of score we might have gotten had Rabin scored Total Recall, rather than Goldsmith.  Being the Goldsmith fan I am, I think it's best Rabin didn't score TR, because as cool as some of Rabin's stuff is, it's becoming rather derivative.  But hey, we're here to discuss the music, not the state of it.

Tracks 5-10, comprising "Act Two", offer more of the same, but with variation.  Track 5, "Paulie's Member" gives us some well constructed drum loops and atonal guitar stuff, while also toying with yet another motif.  With The One, Rabin seems to be big into these 3 and 4 note motifs.  They're fun because of their brevity, but don't leave much in terms of a hummable melody.  Track 6, "Before the Start" makes use of the motif established in "The Light", and grounds the music for the listener (for the first time).  Up until now, we haven't heard much in terms of motivic continuity, so this is a good thing.  "Search for Yulew" serves as a quiet transition track into the second half of the album, which progressively intensifies.  "Sporadic Fire," finally quotes the main theme with the strings with very little percussion behind it and a solid, very low bass line.  Parts of this track remind me of my favorite portions of Deep Blue Sea.  It then goes into some heavy guitar, which just as quickly switches to a series of bars you might've heard in The Sixth Day - yep, the vocal is there and everything.  (It's not a bad thing.)  "The Will to Continue", a moody rollercoaster of a cue, goes from uneasy ambience to another guitar/synth section, ending on "The Light" motif, again, serving as another piece that grounds the score.  "Extreme Emotion," is an appropriately titled cue, if only for the sense of fury it instills.  Starting quietly, it builds on a succession of drum loops layered on top of the other, blending the guitar into the mix, playing a fast series of repeated notes.  At this point, the whole guitar thing gets a little tiresome.  One more guitar cue and it'd be too much; thankfully that's the last of it.

Tracks 11-14 serve as the third and finale act, and finishes up the album in very satisfactory manner.  Track 11, "A New Course", quotes the Deep Blue Sea-ish thing I mentioned earlier, but then segues into some dark, brooding stuff played on the basses.  It's just atonal enough to cleanse our pallets for the thematic stuff coming up.  "Justification" is the first track to fully quote the main theme directly.  Albeit, the orchestration is completely different, interlaced with edgy synth samples dancing to their own beat, but it works and isn't overpowering.  "Rompie's Cue" is short and sweet, going back to some of the stuff heard in "A New Course."  And last, but certainly not least, is the terrific finale track, "The Final Search."  Bringing the listener a complete 360, we're given a fully percussive, progressive treatment of the main theme which builds until it finally drops off into silence.

Rabin's score for The One doesn't add anything new to his resume, but those that enjoy his past work will most likely find something in this album to write home about.  I rag a little on Rabin's use of the guitar in this one, but after it's all said and done, Trevor Rabin is a guitarist.  He's got a way with that instrument, and heck, how he uses it is part of his charm as a composer.  The One might not settle initially as the best listening experience, but spin it a few more times and pay attention to what's there.  For Rabin fans, I think you'll enjoy what you find.