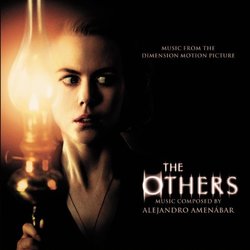 You know it's a slow year for movies when you are considering checking out The Fast And The Furious for a second time. But just when you start to lose all hope in Hollywood, out comes a refreshingly old-fashioned and amazingly well-crafted chiller in the shape of Spanish director Alejandro Amenábar's The Others. His first English language film has an amazing cast (including Nicole Kidman and the vastly underrated Fionnula Flanagan) and all the elements of a classic ghost story to boot: an old house on the foggy Isle of Jersey, dank candlelit rooms, children humming unsettling lullabies. This is the film that Jan De Bont's laughable remake of The Haunting desperately wanted to be. I'd say more, but I don't want to ruin any of the surprises.

Okay, there are two surprises I do have to talk about. The first would be the music credit, which goes to none other than Amenábar himself. (The liner notes explain that he was a composer first, then a director.) The second surprise is that, unlike the iffy work of a lot of other director / composers out there, this is absolutely stunning music that both compliments and creates the unsettling mood of sadness and dread that permeates the film. From the slightly out-of-tune piano to the aforementioned singing creepy little girl, The Others understands and embraces the traditions of the genre. The funny thing is, you've basically got every spooky musical cliché in the book on display in this album, yet there is also enough warmth and genuine emotion behind it to make it all seem fresh.

Sony Classical's forty-one minute album is a pitch-perfect representation of the music that never overstays its welcome. Many of the fifteen tracks here are a bit on the short side, but they also tend to blend seamlessly into one another, making for a grand listening experience. The major musical ideas are stated in the main title "The Others", with hauntingly appropriate solo flute and violin work, alternately lonely and beautiful, and reminiscent of Bernard Herrmann. "Wakey Wakey" establishes a delicate and somber tone for the family's fragile children, and "Old Times" begins a baleful motif for piano and strings that will pay off later in the score. Then things go nuts with "They Are Everywhere", a furious and shocking cue that makes ample use of the brass and bells present here. And so the rest of the album goes, with further highlights such as "Communion Dress" and the heart-wrenching "A Good Mother" sparkling along the way. Even when this music is low-key and unobtrusive, there is always something interesting happening. Not a bit of musical wallpaper to be found here.

While I usually shrink from conjuring the names of other composers in trying to describe a score, here I'll make an exception: if you ever wondered what it might sound like if Thomas Newman and Danny Elfman teamed up to score a old fashioned scary movie, you'd do well to go out and grab this soundtrack right now. Apologies to Mr. Amenábar for the comparison, but I know how film score fans think. And if it was me reading this, I'd be halfway to the record store by now.