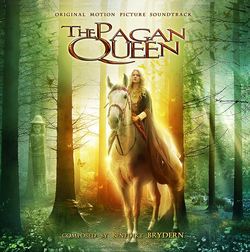 The music by composer Benedikt Brydern is an excellent accompaniment to the legendary life story which is filled with references to Czech classical music. Libuse's theme for instance is based on Antonin Dvork's "Romance in F minor" which is later developed into the so-called "River Song" during the end credits. The first sixteen bars of Dvork's are used in key moments of the film with several different variations commenting on the changing relationship between Libuse and Premysl.

The land of Bohemia is a character in itself and the music recalls moments from the fourth part of Smetana's Ma Vlast (subtitled "From Bohemia's Woods and Fields"). The score to The Pagan Queen was fittingly recorded in the Czech capital with The Prague Metropolitan Philharmonic Orchestra.

Although the score already had a digital release, this CD by KeepMoving Records contains the entire score as opposed to the download that omitted some shorter though still spectacular cues. The program includes all the music and the haunting "River Song" with lyrics by Constantin Werner and performed by noted tenor singer August Schram. The booklet contains extensive liner notes by Gergely Hubai who writes about the Libuse mythology, the making of the film and creation of the score based on original interviews conducted with director Constantin Werner and composer Benedikt Brydern.