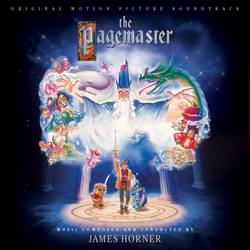 Long out of print, Horner's dynamic score returns—full of wonder and expertly hitting all the story's emotional highs and lows with a masterful touch. Produced by Nick Redman and Mike Matessino and mastered by Matessino, The Pagemaster sounds better-than-ever and includes never-before-released tracks! Exclusive, in-depth liner notes by writer Jeff Bond and magical art design by Jim Titus round out this exciting release. This is a limited edition of 2000 units.