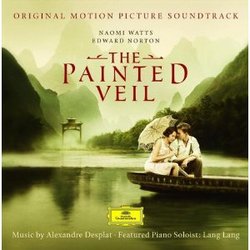 I\'m never quite sure what to make of the Golden Globes. They are woefully poor at predicting the Oscars, especially in the Best Original Score category. But they often have more interesting, and truthfully better, score nominations. So while I enjoy seeing scores I\'ve enjoyed over the past year honored, I temper that enjoyment knowing that getting my hopes up for an Oscar nod is a waste of time.

Desplat\'s new score for The Painted Veil is a case in point. This year he has scored two high-profile, Oscar-worthy films with first The Queen and now The Painted Veil. He\'s just won the Golden Globe for the latter, and after years of trumpeting the man\'s work, I should be hopeful that he\'ll get an Oscar nod, but I\'m not. Still, if there was ever a year he might be noticed, this one is it.

The Painted Veil is about as far as you can get from The Queen and still be in the same aesthetic. The Queen was all wit and charm, slyly winking at the audience through layers of stiff formality. It was a perfect example of a chamber score. The Painted Veil is passionate, lush, and epic. Its reach is wider, its canvas broader. But still, the two scores sit side by side in my iTunes library and the transition from one into the other is smooth thanks to similar orchestrations and a consistent voice. I say all this to point again to what I\'ve long thought is Desplat\'s strength as a composer – he is a master of timbre. Both of these scores (in fact most of his scores) use orchestra, piano, harp, percussion germane to the film\'s setting, and one or two electric instruments, but the way Desplat groups and voices them, makes each score sound completely different. Each matches and enhances the emotional tenor of the films they accompany and draws out unexpected emotions with limited resources. His ability to get inside a film rather than just accompany the action is one sorely lacking in many contemporary film scores.

The Painted Veil is a John Curran adaptation of W. Somerset Maugham\'s novel of the same name. The film chronicles the relationship of Walter and Kitty Fane as they battle an outbreak of cholera in a remote Chinese village in the 1920s and seek to restore their marriage. Two elements immediately jumped out at me when I first read the announcement of the score: first, that the film took place in China, and second, that Chinese pianist Lang Lang would be performing the piano solos. I expected a score along the lines of Tan Dun\'s Crouching Tiger, Hidden Dragon, with Chinese instruments interwoven in a tight tapestry of Western harmonic structures. I should have known better. Desplat has never been interested in tying his score musically to the film\'s physical setting. Instead, he is interested in the characters, their emotional journey, and creating a sonic resonance of that journey. This doesn\'t mean that the setting didn\'t inspire him; "Walter\'s Mission" is full of Chinese references. After a fairly minimalist opening, the cue segues into Chinese percussion supporting a reed instrument that sounds like a suona along with a bamboo flute. But that section lasts a scant thirty seconds. Desplat achieves a similar texture in a similar amount of time in "The Water Wheel," but that cue is filled with cascading piano arpeggios that mirror Ravel\'s work Jeux d\'eau than anything Chinese. One minute out of an hour\'s worth of music is not that large an impact.

In fact, French music seems to be a larger influence on the score than that of China. Desplat has publicly acknowledged that Maurice Jarre\'s epic scores helped him find the sound for The Painted Veil, and, as is often the case in a Desplat score, he even included a classical piece that serves as another model, in this case Erik Satie\'s "Gnossienne no.1". You can best hear Satie\'s impishly playful style in the various "River Waltz" cues, with their unexpected modulations and melodies that seem to have a will of their own. Satie\'s simple sound also seems to appear in the score\'s main melody, "Kitty\'s Theme." This is an introspective theme that Desplat slowly transforms throughout the film as Kitty comes to a better understanding of herself, her husband, and her humanity. Its arch is perhaps the most satisfying element of the score.

Even so, I find the opening cue, "The Painted Veil," to be the strongest overall. It is created out of numerous, small, repeated lines that are slowly layered on top of one another. These lines sparkle and shimmer, creating a deep but not dense sound. On top of these ostinati, Desplat weaves lush melody after lush melody. All his timbral forces are in play in this cue, from the bamboo flute, to various Chinese bells and percussion, to the piano, to the raspy voice of the electric cello. In other words, the score\'s players, both instrumental and thematic, are all presented for us up front so we can follow their journey.

All in all, The Painted Veil is a subdued score. It lacks the overwhelming power and audacity of Hostage, the charm of The Queen, and the urgency of Syriana, but it more than holds its own with the sweep of its vision and depth of its sound. Lang Lang adds the perfect delicate touch throughout, blending perfectly with the score\'s aesthetic. It is a strong score that continues to grow with each listening and makes me eager to see Desplat recognized for it. It even has me getting my hopes up when I know I shouldn\'t.