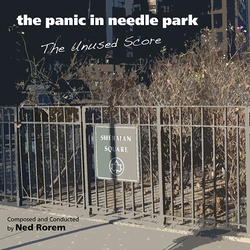 The Panic in Needle Park

Although the film plays entirely without music, The Panic in Needle Park did, in fact, have a score that had been recorded, provided by noted avant-garde composer Ned Rorem.

But when director Jerry Schatzberg heard the score, he made the decision to not use it, letting the film's documentary-like reality play with only the sounds of the dialogue and the natural sounds of the streets and other locations. Very few people even knew about the existence of the Rorem score. Enter Gergely Hubai, who'd written a book on rejected scores called Torn Music. When he finally heard about The Panic in Needle Park, he went on the hunt and found that a copy of the tapes had been sent to the Library of Congress, and that a CD-R of those tapes was in New York. He managed to get it, and then worked with Twilight Time's Nick Redman to include it on the Blu-ray release of the film.

It's a short score, but a potent one. It is, at times, dissonant and jangling, like an exposed nerve, but it's also lyrical and quite beautiful, and also has several really great dramatic cues. Watching it against the film, it gives everything a completely different feel—while one can understand why Schatzberg ended up going without it, it does add some unexpected layers, especially poignancy, to the scenes it accompanies. Hearing it apart from the film is a great listening experience and it's a shame Rorem never did another film score.

The unused score to The Panic in Needle Park is a major discovery, of interest not only to fans of great film music and to fans of rejected scores, but to fans of Ned Rorem's music and 20th Century classical music, as well. The sound is mono, as recorded, but we are here to tell you that it is one of the best-sounding mono recordings ever—crisp and clear with incredible dynamic range. It has been lovingly mastered by Mike Matessino.