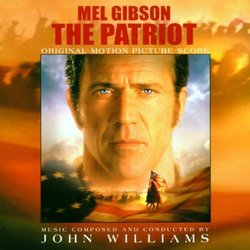 In what was one of the more anticipated films of the summer, Mel Gibson once again takes on the British in The Patriot. A farmer who fought in the French-Indian War, Benjamin Martin (Gibson) has no desire to fight against the British even though they are being taxed beyond reason - because he knows what war can drive men to do. When one of his sons is killed, however, Martin begins to feel differently, and soon his vendetta against the tyrannical British leader becomes the inspiration for the battle for independence from British rule. Directed by Roland Emmerich, who along with Dean Devlin brought us the hugely successful Independence Day (and the not-so-successful Godzilla), their previous efforts had usually involved the talents of composer David Arnold. Arnold had been attached to score The Patriot, but for certain reasons, he was replaced with veteran film composer John Williams. I would have to say that Williams was the perfect composer for this film. It's patriotic, it defines Americana, and it's a really solid drama. I enjoyed the film much more than I was expecting to, and I think that a good chunk of that came from Williams' score.

The score itself begins with a Williams standard: a concert piece of the main theme. Beginning with a rather solo violin playing a somewhat melancholy tune (which for one reason or another evokes strong images of the late 18th century), the cue slowly builds until the percussion starts. Then it starts getting big. Williams revisits the type of style he brought us with his Olympic fanfares - a great solid theme with the orchestra doing everything to support it. After the first five minutes, I realized I had stopped whatever I was doing, and was just staring into space, enveloped by the theme.

From that point, the score becomes standard Williams fare. That is to say, it's quite good - but not brilliant. There are moments thatare a bit too similar to, say, The Lost World that I kept waiting for a Tyrannosaurus Rex to pop out from behind a tree (most notably in "Tavington's Trap"). Also, a few cues reminded me a bit of the overly emotional moments of Angela's Ashes, and due to that - as well as some other moments in the score where the orchestra swells emotionally - I felt just a tad manipulated. But after all, that is (to a small extent) what a film score is supposed to do. The climactic cue in the score, "Martin vs. Tavington" was perfect for a climax. It uses almost all of the themes Williams used in the film, and it supports a rather powerful (and satisfactory) climax.

Williams has a great theme in The Patriot, and he uses it (and other themes) well in the score. There are moments where previous works of his popped into my head, but that is bound to happen with most composers - especially ones that compose memorable scores such as Williams. Released on the Hollywood Records / Centropolis Records label, this is definitely one of the most patriotic scores Williams has given us - and he's given us quite a few. I can't stress enough that this score should be a part of your soundtrack collection - and come Oscar time, you just might see Williams' name on the board, once again.