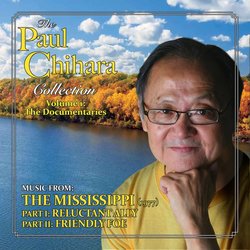 "I've always been interested in music and in movies, since a very early age," said Japanese-American composer Paul Chihara. His life experience has ranged from family incarceration during World War II's Japanese Relocation program to musical training under

Nadia Boulanger at the Paris Conservatoire, and further studies at the Hochschule für Musik in Berlin. He's been a Professor of Music at UCLA, a music advisor to Zubin Mehta, conductor of the Los Angeles Philharmonic for ten years, while he was developing the first electronic music studio at UCLA. He was the first composer in residence of the Los Angeles Chamber Orchestra when it was conducted by Sir Neville Mariner. He got into film scoring through a happenchance call from Roger Corman, who was seeking a graduate student to help with a new science fiction movie, a request Chihara, having just retired from UCLA to become a classical composer, filled personally, presenting myself as his own graduate student. He wound up scoring Corman's Death Race 2000 and opening up a new career in film composing while continuing to maintain a respected career in classical concert music.

Among Chihara's early projects was scoring THE MISSISSIPPI, a 1977 documentary episode for the Cousteau Odyssey TV program, about the famous French undersea explorer, researcher, and filmmaker Jacques Cousteau's expedition over the 2,350 mile-long Mississippi River, second longest river in North America. Chihara's score, performed by members of the London Symphony fulfilling a freelance contract, is an integration of various Americana tunes of the 19thCentury and Chihara's own original cues to support sequences that needed emotive dramatic support. These included a cheerful trumpet theme flavored with a precise swiftness suggestive of the mighty, modern Mississippi, and much music with arpeggios in the lower strings, which depicts the ongoing undercurrent of the churning water of the Mississippi.

Dragon's Domain Records is excited to bring Paul Chihara's score to THE MISSISSIPPI. Mastered by James Nelson at Digital Outland with exclusive liner notes by author Randall D. Larson, with the participation of the composer.