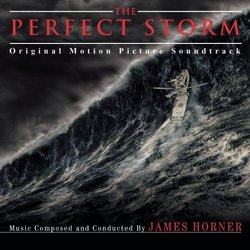 In a rather admirable effort, composer James Horner returns to the sea with his score to the thrilling blockbuster film, The Perfect Storm. Director Wolfgang Petersen's film version of the book of the same name chronicles the devastating "Halloween Storm" of 1991, in which three separate storm systems came together to create "the perfect storm". The story focuses on a swordfish boat, the Andrea Gail, and her crew and how they deal with this terrible force of nature. The book didn't just focus on the Andrea Gail though, it focused on many different things going on at the same time, and in an effort to condense all of this information down to 2 hours, some dramatic license was definitely taken. The book was riveting and informative, and having seen the film before reading the book, I was disappointed in the apparent loss of information that would have been nice to know when seeing the movie for the first time. However, that aside the film was rather enjoyable, and truly an exciting 2-hours to spend in the theater.

Horner, who we last heard in Bicentennial Man and Freedom Song finally delivers us a score he can be proud of. While the usual negative types will point out how bar 53 in track 12 sounds like Apollo 13, etc., I think that this score should be looked at from the standpoint of the film: did it work in the movie? I think the answer to that question is a resounding "somewhat".

The first thing you'll notice about the score is that it has a great main theme that is lyrical and simple - therefore, memorable. The main horn theme certainly seems to fit the small fishing town of Gloucester, Massachusetts, and Horner pulls out all of the stops in his various dealings with this theme. There's the triumphant heroic version, the sad melancholy version, and of course the sad and sentimental version. The action cues ("Small Victories", "Coast Guard Rescue") are truly exciting to listen to, and fans of Horner's work will no doubt be delighted with the way he molds the orchestra into his rather distinctive style of action.

Unfortunately, one of the main problems with the score doesn't come from how it appears on the album, but how it works in the film. On the album, it's a rather satisfying listen. In the film, it works great - when you can hear it. The simple fact is that The Perfect Storm just has a lot of sound effects. There's rain, waves crashing, helicopters, wind howling, etc. Amongst all of that, are we really expected to hear an orchestral score? Granted the score does poke through the maelstrom every now and then, and it helps heighten the tension, and increase the craving for Dramamine. But it seems to me that most of what Horner wrote is either lost in the mix, or just shouldn't have been there to begin with. The brain can only take in so much, and when you're being battered around in the film (and I guarantee you will be battered) the last thing you'll really notice is this score.

All recent James Horner soundtracks have a pop song based on a theme from the score, and The Perfect Storm is no exception. John Mellencamp (he dropped the "Cougar") has a rather good song to sing, entitled "Yours Forever". It makes you realize how good a theme Horner came up with this time around, and is a nice way for the album to come to an end.

Running about 80 minutes long, this is certainly a jam-packed album by Sony Classical. With an average track length of 8 minutes, there is no shortage of music. From the dramatic themes to the action cues, it's pretty much all here. I can't think of anything in the film that didn't appear on the soundtrack - but then, I didn't really hear all of the music in the film over the sound effects. If you enjoyed the film or are a Horner fan, you'll be doing the right thing by picking up this soundtrack. It's original theme, mixed in with familiar orchestrations, makes it an admirable effort on Horner's part.