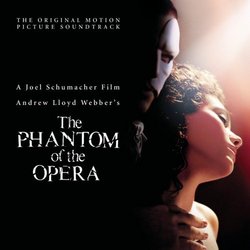 The Phantom of the Opera: Special Edition

Review: Phantom of the Opera: Limited Edition, The

As a musical, The Phantom of the Opera soundtrack is different from most movie scores by the nature of its form, but like 2002's Chicago, The Phantom of the Opera has already been a popular and well renowned Broadway show for eighteen years (since 1986). Despite the fact that Andrew Lloyd Webber wrote some additional music for this cinematic release, there are therefore very few musical surprises; anyone who has seen the original play will find this album quite familiar in many respects. There are two separate commercial releases of this score: a single disk soundtrack and a two disk special edition version. The former is a typical soundtrack with all of the best moments from the musical, and if this is considered similar to a Broadway highlights album, the latter would be about equal with an original cast recording: it contains a more complete track list of the music, but has dialogue and some sound effects in addition. Such dialogue, which serves to connect the songs and make the album more of a recording of the play than just the music, is somewhat distracting. If you're looking for a good, smooth listen, the single disk is perfect; the special addition is really only worth the money for Broadway fans who prefer to listen to the album as they would the play itself.

Musically, The Phantom of the Opera is, of course, outstanding; if anything, in the eighteen years Webber has had to think about it, he has only made it better. His use of the song melodies as themes for the score continues, with some wonderful brass cues, most notably at the end of "The Point of No Return" when the chandelier crashes (track 12; track 9 of the second special edition disk); this was used toward the end of the theatrical trailer. He has also changed some of the orchestration style. For example, the song "Phantom of the Opera" ends with Christine singing a wordless melody for the Phantom and was originally scored with organ and strings; for the movie, Webber has added an electric guitar descant (track 5; track 6 on the first special edition disk). This may seem slightly anachronistic for the setting of the movie, but the sound color alone is wonderful. Regarding the new songs Webber wrote for the movie, they are somewhat unremarkable, as the best melodies are still the classic ones from the original, but the new material also fits into the play seamlessly. I have seen the play on stage and I know the music rather well, but it is still possible a diehard fanatic may find the new music out of place in an already extraordinary musical.

There have been concerns about the casting of the main characters, and as much as I wanted to love this cast, I have to agree that vocally, they do not hold up to the Broadway performers. Gerard Butler and Emmy Rossum are no Michael Crawford or Sarah Brightman. However, Brightman and Crawford, and such touring Phantoms as Brad Little, are exceptional singers, and I would imagine are cast for the voices before their acting abilities. "The Music of the Night" is the song that best demonstrates the Phantom's voice: I first heard Brad Little's version, so even Crawford doesn't hold up to him. But Little and Crawford take Webber's song and play with their vocal ranges and sounds, so when Gerard Butler sings it in a fairly straightforward manner, it pales in comparison. To be honest, knowing the original music, I was not impressed with this cast: Butler's low range is quiet and strained, his accent comes through, and his voice often lacks the clarity and power of his predecessors. In all fairness, however, taken alone and without comparison to the Broadway casts, these actors do more than hold their own. When casting a movie, acting ability is probably most important and voice must be further considered with camera presence and looks, because the cinematography brings the audience right up close with the actors in a way stage cannot even for the front row seats. To focus again on the Phantom, Butler does sing well: he hits the notes, and though he doesn't have the flexibility to play with the songs, they still work. His voice has a gruffness to it that actually fits the character rather well, and he does achieve several powerful moments: in the reprise of "All I Ask of You" (track 9; track 14 on the first special edition disk), and in "The Point of No Return" just before the chandelier crash (track 12; track 9 of the second special edition disk). Emmy Rossum (Christine) is not an opera singer, but she does rather well. I particularly like the song "Wishing You Were Somehow Here Again" (track 11; track 4 on the second special edition disk), which she builds nicely toward the end.

My greatest complaint about this soundtrack is that there is very little score. The regular album has none, which is expected for a highlights recording, but though the special edition has two tracks that are labeled as orchestra (rather than the actors' names) – "Madame Giry's Tale/The Fairground" and "The Swordfight" – they are interrupted by dialogue and sound effects. For example, along with the music in the latter, you hear voices and the clatter of the swords. Webber's score is amazing, but it is only heard as background to the songs, and I would have liked to hear him rework his melodies with an orchestra the way Alan Menken did for his Disney musicals.

Overall, this film cast does not stand on par with the Broadway casts, but considered on their own, they do a good job. The regular soundtrack is a great listen, and the special edition contains a little more if you either ignore or prefer the dialogue and other movie sounds. Regardless of the cast, the eighteen years that have passed, and the musical being on film, this is still Webber at his best.