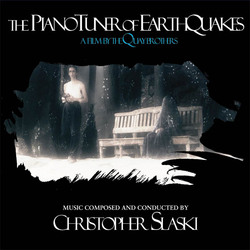 The Piano Tuner of Earthquakes

Review: Piano Tuner of Earthquakes, The

Christopher Slaski has achieved a lot for a composer only 32 years old. Aside from various awards and accolades, he has managed to develop a recognisable style, whilst remaining faithful to the dramatic needs of the films he scores. This style is typically delicate, with subtle melodies and orchestration often resulting in music that feels so fragile it could snap. But he is versatile enough to apply his musical gifts to a wildly varied slate of projects; the satirically anthemic strains of Citizen Verdict, the evocative guitar work of Angela\'s Decision, the enigma of dos. His work on Kevin Spacey\'s Beyond the Sea evokes Thomas Newman but is never derivative, maintaining a freshness that suggests Slaski is a name to watch in the world of film scoring.

His score for the Quay Brothers\' The Piano Tuner of Earthquakes gives further weight to this claim. Slaski rises admirably to the challenge of giving musical life to a decidedly abstract and cerebral fable about a mysterious doctor who kidnaps an opera singer and builds intricate automata from what appear to be parts of human anatomy. It\'s a film that raises more questions than answers and Slaski\'s musical choices breathe life into its often indecipherable visuals and mostly whispered dialogue.

His original compositions are suitably abstract and atmospheric, usually foregrounding soloists with a minimal accompaniment. He uses bass and electric guitar subtly to suggest eroticism on "Sexuality and Sensuality" and "Assumpta Attempts the Seduction of Felisberto". "The Opera and the Earthquake" is a boldly experimental accompaniment to the film\'s climax, beginning in near silence, building to a thundering mess of shrieks and whining strings, and closing again in near silence. Most of the other tracks are too short and shapeless to feature any recognisable development, but they serve the film\'s style perfectly. (Some of the track titles even help to clarify the film\'s confusing imagery, such as "5th Automaton: The Crystal Glass Penis Machine".)

The second composer whose work features prominently here is the late Trevor Duncan, a gifted British composer of \'stock\' (or \'library\' or \'light\') music for radio, film and television. Four tracks from Duncan\'s suite, "The Unwanted", provide a rewarding addition to this album. Duncan\'s music is richly evocative and could easily be mistaken for Alex North or Leonard Bernstein, providing a welcome contrast to Slaski\'s spare and atonal compositions. The use of stock music in the film lends an air of nostalgia to the relationship between Malvina and Felisberto, subtly suggesting a connection stretching back through time.

Aside from the inclusion of works taken directly from Duncan\'s repertoire, Slaski provides a sublimely delicate arrangement of one of Duncan\'s themes (featured most prominently in "The Girl: Theme") and uses it as the basis for his own love theme. Performed in two versions, one on solo harp, the second with an added solo contralto, the sparse arrangements help to bridge the musical gap between Slaski\'s and Duncan\'s work, lending a sense of unity to the recording as a whole.

There is a pleasing symmetry to the sequencing of the tracks: the opening, middle and closing tracks ("Malvina Sings I", "II", and "III", respectively) feature a short burst of Malvina\'s delicate contralto (voiced by Catherine Denley), evoking her inexplicable omnipotence. On the first of these short bursts, her voice is bold and high; on the second it is somewhat softer and more distant; and on the third it is as if we are listening to her from across a vast expanse. The tracks in between are divided, more or less, into two halves according to their composers.

This is certainly a recording to recommend to lovers of baroque music, but the strange and effective confluence of seemingly disparate styles make it essential listening for anyone looking to escape from the standard Hollywood fare.