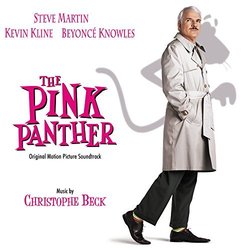 The idea of a new Pink Panther movie had been floating around Hollywood for years, at one point with Mike Meyers supposedly interested in the role of Inspector Clouseau. In the end, Steve Martin took on the role that Peter Sellers embodied, and the film proceeded on a rocky journey that would find it plagued with rewrites, re-shoots, swapped composers, and two release delays. In the end, the film made a decent showing at the box office, even if the critics generally panned the effort. The music, by Christophe Beck, was released recently by Varese Sarabande Records, and taken separately from the film, it provides a refreshing and enjoyable listen, with plenty of references and respect to the classic Pink Panther theme composed by Henry Mancini.

Beck starts out the album with the "Main Titles", a straight-up arrangement of Mancini\'s theme, with a small interlude in the middle. Much of the score can be broken out into two categories: playful incidental and jazz ("The Area is Secure", "Blind Love", "006 Calling", "The Ring", "Dragalong Dreyfus") and tender emotion ("A Farewell to Ponton", "Clouseau\'s Lament"). Beck wrote a new theme, an inverted variation on Mancini\'s, which is heard dramatically (and somewhat ominously) in "Dreyfus in Charge" and "The Area is Secure", and then playfully and whimsically in "Helping Nichole Get Off".

For me, the more interesting tracks were the ones that allowed for respectful manipulation of Mancini\'s theme. "Perfect Day for a Murder" is an electronic/orchestral blended track which uses elements of the Pink Panther theme to build tension and dramatic weight, with a bit of a beat. "Paris Bound" has a hip rhythm, and "Pinch a Finger" is a sneaky tense cue which builds into a fast-paced version of the theme at the tail. "Waldorf Astoria Arrival" is a traditional arrangement of the theme, and the "End Titles" are a more modern fast-paced jazzy improv-inspired rendition featuring accordion, vibes, and guitar.

The last track is just a new recording of the traditional "Pink Panther Theme", but it sounds great. You can tell that Beck has nothing but the utmost respect for the original material - he even uses legendary saxophone player Plas Johnson (who performed on the original score). Casey Stone\'s mix is crisp and detailed, and overall the album - running 35-minutes long - is the right length, with a nice blend of original score infused with Mancini\'s classic theme.