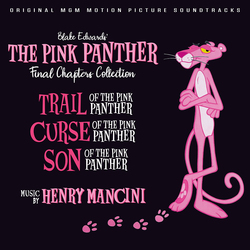 Quartet Records, in collaboration with Metro-Goldwyn-Mayer, presents a mammoth 3-CD set with Henry Mancini's complete scores for the last three films in the Pink Panther franchise directed by Blake Edwards but filmed without the inimitable Peter Sellers as Inspector Clouseau (Sellers died in 1980).

Trail of the Pink Panther (1982) and Curse of the Pink Panther (1983) were shot at the same time, and both focus on attempts to explain Clouseau's mysterious disappearance. In the first film, Joanna Lumley plays a journalist who collects information about the famous inspector, and in Curse it's a clumsy American policeman (Ted Was) who is in charge of the investigation. Both films feature some of the saga's most famous faces: David Niven, Capucine, Robert Wagner, Robert Loggia, Harvey Korman, Burt Kwouk as the Japanese butler Cato, and, of course, Herbert Lom as Chief Inspector Dreyfuss, Clouseau's nemesis.

Son of the Pink Panther (1993) was Edwards' last effort to revive the franchise that had given him so much success in the past, but without the presence of Peter Sellers it was not successful. With Roberto Benigni as a mysterious secret son of Clouseau who is also a policeman, the film essentially buried the saga until it was revived years later by a different team with Steve Martin as the French inspector.

If these three films deserve to be remembered, it is for having been lucky enough to have the faithful Henry Mancini composing the music. Each score is a treat, featuring touching melodies, funny tunes, romantic and action pieces and source music—all handled with the composer's usual elegance and good taste. Son of the Pink Panther was also the last score written by Mancini before he passed away, as well as the last film directed by Blake Edwards, thus closing a circle of 28 films together and additional collaborations for television.

Trail of the Pink Panther was released in a Pink Panther compilation in 1982 with only two tracks specially recorded for the album; the full score was not released until 2011 by Intrada. Curse of the Pink Panther had its first official release in 2010 by Quartet Records, and Son of the Pink Panther was issued by Milan Records in 1993 in a short but beautiful album assembled by Mancini himself. For this box set we are presenting, for the first time, the entire score prepared by Mancini for the film, with several unreleased pieces and the actual film versions of others. Trail and Curse are remastered reissues of the previous—and long out-of-print—Intrada and Quartet releases. Curse is also presented with its original cue-sheet titles.

This collection has been produced, restored and mastered by Chris Malone. The set includes a lavishly designed 24-page booklet with in depth liner notes by film music writer John Takis.