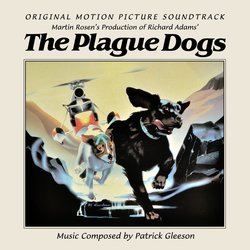 Composer and electronic music pioneer Patrick Gleeson grew up in Seattle with initial musical hopes to become a jazz pianist until he became hooked on electronic music. Influenced by Wendy Carlos, Gleeson released several albums of electronic interpretations of classical and pop music, and then merged his interests in synthesizers music and jazz during his collaborative work with keyboardist and bandleader Herbie Hancock in the early '70s. This, and a bit of music for short films – including heading the synthesizer group responsible for orchestrating and performing the film electronic score for Apocalypse Now – brought him to Martin Rosen's attention and he gained his first feature film assignment scoring The Plague Dogs. Influenced by techniques of American minimalism as well the music of Polish composer Witold Lutoslawski, Gleeson wrote a sophisticated score that suited the style of Rosen's uncompromising filmmaking. The music is performed by members of The Kronos Quartet, augmented by Gleeson's then-state-of-the-art electronic synthesizers. The score is not thematic-based, but rather allows each musical moment to unfold like a new chapter, giving each sequence a unique musical design of its own.

Dragon's Domain Records is excited to bring The Plague Dogs to compact disc for the first time, mastered by James Nelson at Digital Outland with exclusive liner notes by author Randall D. Larson, with the participation of the composer.