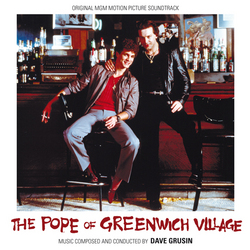 The Pope of Greenwich Village

A warm jazz-based tune opens an outstanding score range of styles: from rhythmic jazz-funk to electronic sounds, from full symphonic music to bittersweet piano pieces "made in the Grusin style". In fact, this score is a delight for Grusin fans because it is a perfect compendium of his approaches, including the dramatically complex orchestrations of The Yakuza, the contemporary jazz sounds of Tootsie, the delicacy of The Heart is a Lonely Hunter and his subsequent noir score for Mulholland Falls. All can be found here.

In addition to his original score, Grusin adapts and conducts one of the most memorable and thematic uses of jazz standards in New York City's cinematic history, all of them included in the "extras" section of this album.

Although this was a major work in the composer's career, the album of The Pope of Greenwich Village was never released. Fortunately a complete set with the 24 multi-tracks session were preserved in the MGM vaults in mint condition. Every second of music composed, adapted and recorded by Dave Grusin has been included in this album.