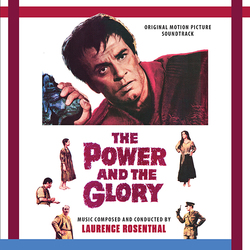 The Power and the Glory

Intrada announces the premiere release of an early work from composer Laurence Rosenthal, the 1961 film The Power and the Glory. Composed after A Raisin in the Sun and before The Miracle Worker, it may be an early score, but from a rich period for Rosenthal and one of his favorite scores. For the film's setting in Mexico, Rosenthal composed a score of appropriate flavor and atmosphere, capturing the essence of both the time period, the locale, and the struggle between religion and government. Rosenthal had a particular love for Mexican music, which is reflected in the rhythms and drama throughout this powerful score.

The film had a heavy hitting cast that included Lawrence Olivier, George C. Scott, Julie Harris and Patty Duke, produced by David Susskind, with whom Rosenthal worked on Rashomon and Requiem for a Heavyweight. It was based on the novel by Graham Greene, who also wrote The Comedians that Rosenthal would later score when the film adaptation was produced a few years later. In the film, Olivier plays a cynical Catholic priest sent to preach in Mexico at a time (1930s) when the government perceived the Church as competition. As a result the government launches a plot to assassinate him.