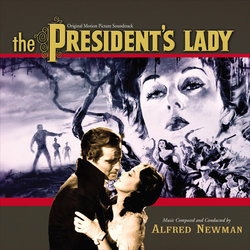 The release of one of Alfred Newman's greatest scores would be historic at any time, but releasing it this month in particular, just after the election, seemed particularly appropriate.

This 1953 Newman opus has long been one of the most clamored for soundtrack releases of the many scores of his still awaiting release. If you don't know it, you're in for quite a treat. This is an absolutely thrilling entry into our ongoing series of Twentieth Century-Fox classics!