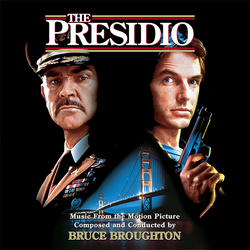 Bruce Broughton's music for 1988 Paramount film The Presidio is pulse-pounding and exciting, balancing orchestra and synthesizers in equal measure throughout the movie's chase sequences, climaxing with the standout nine-minute action cue. Much of the composer's music sets out to enhance the movie's suspense and underscore the investigation, utilizing a central four-note motif that Broughton adapts to varying dramatic effect, characterized by a wide downward leap on the second note. It was that simple and from this tiny anchor he could take the score inward toward suspense or outward toward action—and, most importantly, develop the motif into a fully realized theme finally heard at the close of the score.

This premiere CD featuring the complete score and alternates was mastered from the original session elements, initially recorded on digital 32-track tape at 20th Century Fox Studios by engineer Armin Steiner, then subsequently converted directly into two-track stereo mixes on both digital and analog tape. The resulting audio is crisp, clean and vibrant.