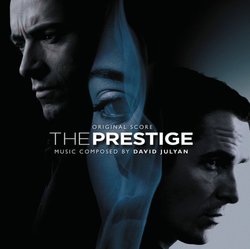 Director Christopher Nolan is quietly establishing himself as the new (and improved) M. Night Shyamalan. His take on the superhero genre in Batman Begins was realistic and poignant and, now, with The Prestige, he crafts a distinctly Shyamalan-esque film with twists and turns and a final reveal. I found the movie to be quite enjoyable, if only predictable. Its atmosphere reminded me of the quietness and subtleties of The Sixth Sense and, thus, another comparison is formulated: David Julyan\'s score to The Prestige has to function in a manner similar to Newton Howard\'s The Sixth Sense, gently pushing, establishing the desired atmosphere of dread, but never stepping forward and taking over. However, where Newton Howard\'s scores for Shyamalan\'s films are clever and rich, Julyan\'s here is merely functional.

The pledge is interesting: David Julyan\'s esthetics, driven by atmospheric writing and lento string harmonies, and a movie about dueling magicians and the boundaries one is willing to push to impress and dazzle. That notion is interesting; the execution, disappointing. Extremely disappointing, in fact; while not a fan of Julyan\'s music, I have been able to appreciate some of his past work. Particularly effective are the finales he composes for the movies he scores. A track such as "How Can I Heal?" from Memento is depressing and aching, a really strong piece of writing; the same can be said of "Let Me Sleep" from Insomnia, a piece cut from the same cloth, using minimal harmonies for the strings which create a great emotional flow. The Prestige has none of that; it rumbles and oozes in the background, amorphous, its long string chords being stretched out in an adagissimo mode devoid of dynamics. It works within the context of the movie: its long minor harmonies establish the right texture and the composer uses a quiet piano here and there when the particularly warming sight of a family is revealed, for instance. But that is all it does. Striking is the use of the two-note destiny motif from Batman Begins which is introduced as we see the imposing landscape of Colorado Springs and which is jarring to the score connoisseur. Maybe the director fell in love with it.

The movie The Prestige claims every magic trick worth its salt consists of three movements and I will quote Michael Caine\'s character from the trailer to the movie:

The problem with Julyan\'s score to The Prestige is that it starts with the pledge and never turns. It shows you something ordinary but the composer never makes it do anything remotely extraordinary. Within the context of the movie and like the character of Borden, it creates the illusion but lacks the flare and panache that makes a magic trick come to life. And for a movie calling itself The Prestige, that\'s a death sentence.