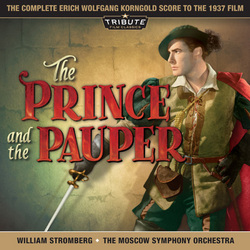 The Prince and the Pauper

Rich ... complex ... difficult ... demanding ... impossibly fast ... and fun. These are but a few of the descriptions attributed to the film music of Erich Wolfgang Korngold.

So it is with Tribute Film Classics' impeccable new rerecording of Korngold's music for The Prince and the Pauper, the 1937 Warner Bros. version of Mark Twain's endearing tale of mistaken identity and court intrigue starring Errol Flynn. "Korngold's score is reminiscent of music for a commedia dell'arte; it is sparkling, humorous, and heartwarming, capturing all the naiveté of childhood, the regal splendor of the court, and the demeaning poverty of Tudor England," says the composer's son, George Korngold.

"I found it to be one of the most musically dense scores we've reconstructed," says Tribute executive producer Anna Bonn. "The Moscow Symphony Orchestra performed every note with expertise and made us proud. Music of Korngold's quality deserves to be found, restored, and polished so that new generations can enjoy its treasures."

William T. Stromberg once again conducts the esteemed orchestra that has performed previous Tribute recordings such as Bernard Herrmann's Mysterious Island, Fahrenheit 451,and The Kentuckian, and Max Steiner's She and The Charge of the Light Brigade—all to unanimous acclaim.

"Bill conducted this difficult music with gusto, and the orchestra followed him with precision and excitement," says producer and noted score reconstructionist John W. Morgan. "I was delighted that Bill was able to retain Korngold's eccentric tempo changes in some of the (seemingly) impossibly fast music—and even more delighted that the orchestra stayed right with him!"

"Conducting Korngold's music is just plain fun," says Stromberg. "Not only did he write some of the most gorgeous and joyously rambunctious music ever created for the cinema, he also wrote some of the most demanding for orchestra and conductor. You simply cannot be a "time-beater" when conducting his music—it is written in such a way that it must feel like one man performing at a piano with a natural musical ebb and flow ... only it actually involves seventy to eighty orchestra players all playing together!"

Morgan adds, "I regard The Prince and the Pauper as one of Korngold's very best scores, and we hope our shared excitement is transferred to those who come to this music for the first time, as well as to veteran Korngold fans."

This classic Korngold score CD comes with a 32-page full-color booklet marvelously designed by Jim Titus, featuring notes from each of the Tribute principals along with rare stills and artwork. Film historian Ryan Brennan provides an extensive overview of the production, and the cue-by-cue analysis is by Curt Hardaway.