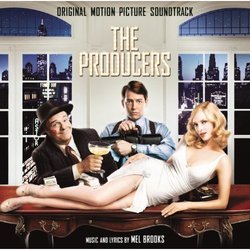 The Producers is arguably one of the funniest films ever made. It was Mel Brooks\' debut as a director, and he even won an Oscar for the hysterical screenplay about a failed Broadway producer, Max Bialystock (Zero Mostel) and his scheme along with accountant Leo Bloom (Gene Wilder) to create a sure-fire flop of a musical, and keep all the money from the backers. Their choice: Springtime for Hitler. Twenty years later, Brooks\'s dream of having a show of his own on Broadway would turn the Great White Way upside down when his musical version of The Producers turned out to be anything but a flop: it won the most Tony Awards for a single show, ever. Following the trend of Broadway-turned-Hollywood films like Chicago and The Phantom of the Opera, it was inevitable that the musical version of Brooks\' classic story would make its way to the big screen.

Bringing us on this journey is the director of the musical, Susan Stroman. Along with her are the principles from the original Broadway production, including Nathan Lane as Bialystock and Matthew Broderick as Leo Bloom. Replaced with "Hollywood talent" are the roles of Ulla (Uma Thurman) and Franz Liebkind (Will Ferrell). The music and lyrics were all written by Mel Brooks himself, with the assistance of Glen Kelly (arranger/underscore) and Doug Besterman (orchestration). Two of the songs from the 1968 film - the classic "Springtime for Hitler" and "Prisoners of Love" make a return, as well as 15 new ones, and even a few bonus tracks.

Broderick as Bloom doesn\'t quite live up to the hysteria-laden performance that Gene Wilder established, but you quickly forget it as he warms up within the first third of the film. Lane as Bialystock is perfect, doing justice to Zero Mostel, and singing his heart out. Thurman is not as weak as I had expected her to be, although she doesn\'t belt it as well as Cady Huffman in the original Broadway show. What can one say about Will Ferrell? Probably not too much, except that we want more of him! He\'s excellent as Franz Liebkind, the Hitler-loving scribe of Springtime for Hitler. The rest of the cast is great as well, including Broadway show originals Gary Beach and Roger Bart.

The songs take us through the story. (Spoilers follow, but you should have seen the 1968 film!) Starting with "Opening Night", Max\'s latest show - a musical version of Hamlet - is a flop. Bloom, his accountant, arrives and notices that one can make more money with a flop than with a hit, spurring Max\'s grand scheme ("We Can Do It"). Of course, Bloom protests, but then back at work, he realizes he can achieve his dream ("I Wanna Be a Producer"). From there, the two find the worst play ever written, and get Liebkind to sign the rights to them - but he will only do so if they join him in a German dance: "Der Guten Tag Hop Clop". Now they need to find the worst director - the flamboyant Roger De Bris ("Keep it Gay"). Ulla shows up hoping to join the production ("When You Got It, Flaunt It"), and then Max dives head-first into little old lady-land, to raise the money ("Along Came Bialy").

Ulla and Leo are falling for each other ("That Face"), and then after a bit of casting tryouts, ("Habe Sie Gehurt Das Deutsche Band?"), Liebkind is cast as Hitler. Liebkind breaks his leg and is replaced by Roger De Bris at the last minute - making the build up ("Springtime for Hitler") as offensive as possible, and Hitler as gay as ever ("Heil Myself"). Unfortunately, the show is a huge success because it\'s so ludicrous, and so Ulla and Leo run off to Rio with the money ("You\'ll Find Your Happiness in Rio"). Max is now in jail ("Betrayed"), but as he\'s being sentenced, Bloom re-appears to talk about his virtues to the judge ("Til Him"). Not wanting to break up the friendship, the two are sent to jail, where they dive right into another scheme ("Prisoners of Love").

The album ends with a new song written for the film, "There\'s Nothing Like a Show on Broadway", a tip of the hat to the Great White Way (ironic that it\'s written for a film). This is followed by the obligatory pop song from the film. Except that in this case, it\'s sheer brilliance. Brooks gives us a pop song of the worst song you could make a pop song out of, and the result is "The Hop-Clop Goes On", with Will Ferrell singing ala Celine Dion in an obvious jab at "My Heart Will Go On". It\'s downright side-splitting, from the James Horner-esque arrangement, to the whispered dialogue at the end. There\'s also a bonus track: "The King of Broadway" is a great song from the beginning of the show featuring Lane, but was cut from the final film.

Overall, the music is so catchy and fun, that you\'ll find this album in your CD player for weeks. The songs are great, and whereas the Broadway version was styled as an homage to the heyday of Broadway, the film is a big jazzy MGM musical style. It\'s bigger and bolder than the cast album, although I prefer the Broadway version of a few songs. In any case, if you\'re a fan of musical theater, or just interested in songs that are a lot of fun, this album is definitely worth picking up.