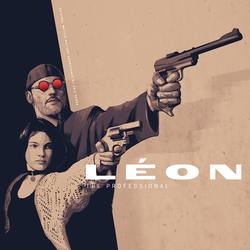 Waxwork Records' new double-LP release marks the very first time the film score by composer Eric Serra has been released on vinyl. Combining both electronic and orchestral cues, Serra creates a score that is tense, yet beautiful, which compliments the film's action sequences and the childhood innocence of Mathilda.

In keeping with Waxwork Records' tireless efforts to create the highest quality soundtrack and film score releases on vinyl, the audio for The Professional (Leon) was sourced from the original master tapes and then re-mastered for vinyl by producer and former White Zombie guitarist, J. Yuenger. The packaging includes 180 gram colored vinyl, heavyweight old-style tip on jackets with soft-touch coating, and new artwork by Oliver Barrett. Léon: The Professional is available in two variants: "Gunmetal" with Black Splatter Vinyl & "Upper East Side Splatter" Tan with Black Splatter.