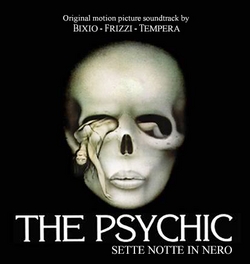 The Psychic (Sette note in nero)

For its second release on CD, DIGIBEAT makes available once again the iconic score composed by the great Italian Maestro trio Franco Bixio, Fabio Frizzi and Vince Tempera for the 1977 thriller/horror movie The Psychic (Sette note in nero).

The score's famous seven-note theme was used by Quentin Tarantino in Kill Bill Vol. 1, an homage that consecrated in people's minds the cult status of this movie and expanded its popularity from Hollywood to the rest of the world.

These great sonorities are now available again with two wonderful bonuses: following the main program (the same as previously released by DIGITMOVIES which sold out many years ago), we added two suites performed and recorded at Frizzi's concerts in England, one from October 31, 2013 at Union Chapel (which is already available in the Frizzi 2 Fulci album, BEAT CDX 1008) and the other from October 31, 2014 at the Barbican. The Barbican suite is a real ''bootleg'' rarity, unreleased and recorded live in stereo, a renewed homage to horror master Lucio Fulci.

The CD is released in a jewel case with a 16-page fold-out booklet, with audio mastering by Claudio Fuiano, graphic design by Alessio Iannuzzi and exclusive liner notes (in Italian and English) by the composers!