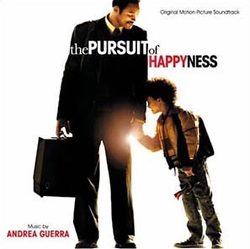 The Pursuit of Happyness

Review: Pursuit of Happyness, The

This album from Varese Sarabande contains the majority of Andrea Guerra\'s underscore for the Will Smith salesman-to-stockbroker film The Pursuit of Happyness (2006). The film is an adaptation of Chris Gardner\'s memoir of his hard times as a single parent and underpaid stockbroking intern. (The film makes the intern position altogether unpaid for a little extra emotional mileage.) The film is fairly well acted and executed, but the whole thing passes by a bit easily considering the potential for some serious social comment. Among the things that bother me: the script is a fairly formulaic study of a rise above circumstances, leaning heavily on action that can be more easily visualised (e.g. endless scenes of Will Smith chasing somebody through the streets, showing his genius by figuring out a Rubik\'s cube) over arguably more relevant events (e.g. we get so little a sense of why Gardner is chosen above the other interns in the end). As for the tough life of poverty, this film parades the best poverty movie money can buy, recreating the period in style, bathing Gardner and his son in soft afternoon light as they aspire to better things, smoothing over the rough edges of the locations. Nonetheless, despite being overproduced at the expense of the story, the film communicates powerfully to people: I\'ve been chased out of many a house for suggesting that it\'s anything but the most moving story to come out of Hollywood in a while.

In the hands of the right writer and director team, this is a film that probably wouldn\'t have needed to lean much on music at all. But since the film is the sort that books an appearance on Oprah, there is plenty of music, very little of it saying anything deep about the film. Andrea Guerra\'s music for the most part participates in softening the edges of being down and out in early eighties San Francisco. There\'s a sense of childlike amazement and emotion to the whole score, which speaks to the aspirations of Will Smith\'s character - no stark musical rendering of poverty or pessimism here. I\'m familiar with the composer only from his contributions to the Hotel Rwanda soundtrack, so I have little sense of his style as a film composer. The whole score is written in the warm acoustic textures familiar from the scores of Rachel Portman, Thomas Newman, and (especially) Rolfe Kent - gentle strings, guitar, xylophones, woodwind solos, keyboard and light percussion.

Guerra\'s main theme is light as a feather - an eight-note melody presented for piano over soft bouncy strings and woodwinds in "Opening". It\'s a simple attractive theme, if a little too close to Rolfe Kent\'s About Schmidt theme to feel original. The title theme is not repeated often, and not really developed when it is - the numerous variations in "Where\'s my shoe?" essentially consisting of shifting instrumentation around an unchanging melody. More extensively used is the childlike five-note xylophone motif between statements of the main theme in "Opening". It contributes strongly to the sense of optimism throughout the score, and Guerra uses the idea beautifully for the main character\'s fleeting moments of elation later in the score - "Possibly", "To the Game / Touchdown", "Happyness" and the finale "Welcome Chris". There\'s also a nice, subdued appearance of the idea in \'Locked Out\'.

I alluded to the film\'s (unexpected) reliance on chase scenes before, and you can definitely detect their presence via the soundtrack, though the dashes of allegro writing pleasing add to the variety of the album. While no two of these tracks are identical, there are basically two patterns overall: "Being Stupid" is extremely reminiscent of Thomas Newman with its layered sound of xylophone, pizzicato and piano and percussion rhythms vaguely reminiscent of the pop of the period. The other type is typified by "Running", with more formal structure and nice shifts in orchestration over a skittish string rhythm. Careful placement of cadences and flourishes lends a playful dimension to these scenes of one man (literally) chasing his livelihood. Even if it is all a bit familiar, to Guerra\'s credit he mixes it all up and keeps it engaging - for example, the flutter-tongue trumpets in "Park Chase". And there are signs of a careful attempt to distinguish the dramatic urgency of the different scenarios on display in the film. Subtle dissonances creep into the playful popish style of "Rubik\'s Cube Taxi" to suggest that more is at stake in this cue for the Will Smith character compared to the jaunty allegros found elsewhere on the album.

The darkest the music gets is for scenes like "Trouble at Home", where synthesized textures create subtle dissonances with the troubled string melody. That solemn melody - similar to Rachel Portman\'s melodic style - returns for the moving one-take sequence where "Linda Leaves". (The tapping percussion over oboe and strings seems to characterise Linda\'s growing irritation at Chris\'s aspirations beyond his station.) Similar melodic despair characterises "Locked Out", which even briefly engages in a nice contrapuntal setting of the score\'s aspirational and despair themes.

The recording keeps a soft sound on the whole thing, and the Hollywood Studio Symphony\'s performance under Blake Neely\'s baton is typically strong. I can\'t really commend this as a film score - it works, but you have to go with the aesthetic choice to candy-coat harsh times for a mass audience to feel like paying for the experience. Even taken on its own terms, the music isn\'t terribly original, however fitting in context. Nonetheless, the album is sufficiently varied to communicate a pleasant and inspirational musical journey, it\'s all tonal, and avoids all but the barest of dissonance, making it a score I wouldn\'t hesitate to recommend as a gift to fans of the film and others in need of cheering up.