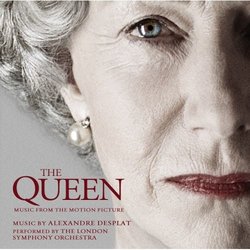 Every year at this time, studios begin to trot out their Oscar hopefuls. Dutifully following suit, those of us interested in these ephemeral awards begin speculating as to what scores might be awarded, which are worthy, and what the distinction means.

Today, let me boldly state that I know one of the nominations. For the wonderfully effective movie The Queen, Helen Mirren will be nominated for best actress. Surprised? You probably thought I was about to boldly claim that Alexandre Desplat would be nominated. If there were any justice in the world, he would, as The Queen represents one of his best scores, but it points to the fickle nature of the Academy Awards that I cannot say with any certainty that he will be honored. But consider yourself put on notice that even if the Oscars overlook this delightful score, you should not.

Desplat is one of the most versatile composers writing today, which in some ways makes it difficult to talk about his music. With most film composers, I can use a form of shorthand, telling you how each new score varies from the composer\'s aesthetic. With Desplat, I have to start again with almost every score. Therefore, let me begin by at least telling you how it does not relate to his other scores. The Queen is perhaps the most classically-oriented score Desplat has written for a Hollywood production. The style is fitting given that the movie delves into the lives of the British Royal family, especially Queen Elizabeth II, during the week between Princess Diana\'s death and her funeral in August and September of 1997. This choice shows up in several ways. The opening cue "The Queen," for instance, starts with a fanfare with tympani playing a martial beat, brass playing full triadic chords, and strings constantly moving in arpeggios underneath it all. But the fanfare is only the beginning – halfway through the harpsichord breaks in to signal a new section, followed by the harp playing the exact same figuration, finally concluding with a somber string orchestral melody. The timbres Desplat uses in the cue, especially the short instance of harpsichord, immediately place you in an aristocratic setting, one that aurally seems to be from another time. Given that much of the film underlines how removed from the present time and the mood of the British people, this aural dislocation serves the film perfectly.

You can see how subtle Desplat\'s use of timbre is by further considering the two cues that deal explicitly with Princess Diana, who looms large in the film considering she only appears through archival footage. "People\'s Princess I" and "People\'s Princess II" open with a pulsating electronic drone (one that almost sounds like morse code) that is quickly joined by a regular four-beat bass line. These two instruments flow throughout both cues as Desplat takes the main melody through different instrumentations, almost like Diana were the melody, trying to figure out how she fits into the Royal family. The melody goes through strings, through woodwinds, and notably through the harpsichord, before landing on a synthesized version of the harpsichord accompanied by strings. By finally settling on a modern version of the harpsichord, you hear and see that this Princess managed to take the Royal family out of their strange isolation and bridge the divide between them and modern Britain.

For me, perhaps the most delightful way Desplat uses classical techniques is found in the paired cues "Elizabeth and Tony" and "Tony and Elizabeth." Tony Blair was newly-elected Prime Minister in 1997 and you can hear the delicate dance between the two heads of state in their meetings since Desplat scores their interactions as a waltz. You even hear hints of timbres from "People\'s Princess I" glinting through as Blair was the one to christen Diana with that sobriquet.

The final touch that sets this score apart is the inclusion of Verdi\'s "Libera Me" from his Requiem. The "Libera Me" was one of Diana\'s favorite pieces of classical music and was sung during her funeral, the event that ends the movie. I only wish he had also included John Tavener\'s Song for Athene that was sung as her casket was carried out of Westminster Abbey.

All in all, The Queen is a mesmerizing score. With Firewall, Desplat seemed to have run out of fresh ideas for Hollywood scores, but by returning to smaller, independent films like his early outstanding work in Birth and Girl with a Pearl Earring, he gives us an insider\'s view of modern royalty through forms associated with them for hundreds of years. I cannot recommend it enough.