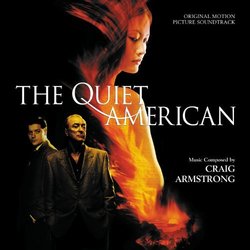 With no more than a dozen or so film scores under his belt prior to The Quiet American, Craig Armstrong's recognition comes from only a handful of films and this primarily from his work on Moulin Rouge: the score to the movie as well as the arrangements for the songs; his scores for The Bone Collector and Plunkett and Macleane likely constitute the beginnings of his more public career. Unfortunately, even a good score may be overlooked for a movie that doesn't do well at either the box office or the awards, and with only a best supporting actor nomination for Michael Caine, The Quiet American was such a film.

Though parts are typical Armstrong - the piano as the foundation for the score, the strings, the electronic percussion - The Quiet American is also new for Armstrong stylistically as he adds Vietnamese rhythms and instrumentation for an authentically ethnic feel. As Zimmer would do the following year for The Last Samurai, Armstrong studied the music of the region extensively in order to capture its essence. He did not, however, write a Vietnamese score and, again like Zimmer, keeps several of his former stylistic elements; both movies involve Americans in foreign countries and the American sounds these composers established in former scores remain as a reflection of the western elements in these films. While the movie deals with a mixture of cultures, Armstrong's score similarly weaves American and Vietnamese sounds.

The score opens with the title track, which is grounded in a moving piano theme with a string motif layered above in pitch and generally reflecting the piano theme; to this, Armstrong adds a female vocal soloist and electric percussion. The piano and strings combine to beautifully capture the quiet tone of the movie, the love story, the serenity of Saigon, and Caine's character Fowler's attempts to remain separate from the rising conflicts of the start of the Vietnam War. These are the expected, or "American," elements to Armstrong's score, and the Vietnamese vocalist brings to this sound the reminder of place, while maintaining the serene – but almost tragic – tone. But it is the electric percussion that does not fit perfectly; the sound is jarring and almost too modern for the film, which takes place in 1952. It increases the tempo of a movie that is, even in spite of the various war scenes, quiet, and is not the ethnic sound Armstrong uses later. This electric motif comes in throughout the movie, usually in short cues that seem random to the events of the film, and though they give the film a semblance of tension, they often seem out of place; the violin line could have achieved this tension without the percussion.

Armstrong does, however, use ethnic Vietnamese percussion at other times, which is perhaps part of why I question his use of the electrics. The track "Death in the Square" is perhaps the most powerful of the movie, but also the best use of Armstrong's themes and ethnic elements. The scene in the movie is almost a montage of the wreckage after a bombing in Saigon and is silent save for the music. It starts with a soft chorus, followed by a string line and ethnic percussion, and then the return of the solo vocalist and piano, performing the main theme from the opening track. These sounds capture the tension of the moment with the ethnic sound of Vietnam, and build with a French horn into an effective and moving cue. The occasional French horn is the only brass in this score, and it is used for sound color. It appears in the background in the opening track, but is otherwise heard most often during the war scenes where there are explosions going off. I would not go so far as to say that the French horn is an "explosion" motif, but the sound color is certainly associated with these moments.

Overall, The Quiet American captures both the quiet and tragic tones of the film: the emotions within the movie as well as the looming tragedy of the war to come. It reflects the musical culture of Vietnam through the solo vocalist and native percussion rhythms and instruments, when present, but this tone is broken by the electric percussion. It also combines this with Armstrong's western style that mirrors the cultural themes of the movie. On album, the music is a fairly serene, good listen, but may be a little slow for some listeners. In the movie, the score is a little on the minimalist side as there are many moments in which the music is entirely absent; but what's there is good. I would have liked the music to be more consistent in the movie and carry a slightly stronger presence in some scenes, and the score could have done without the electric percussion, despite the fact that it is one of Armstrong's trademarks.