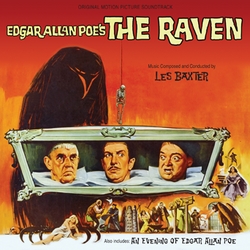 The Raven / An Evening of Edgar Allen Poe

In 1960, Roger Corman made House of Usher, the first of his inspired-by Edgar Allan Poe films, and it was an exploitation sensation, playing to packed houses and packed cars at drive-ins. Knowing a good thing when he saw it, he followed with more inspired-by Poe films, including The Pit and the Pendulum, The Premature Burial, Tales Of Terror, The Raven, The Haunted Palace, The Masque of the Red Death, and The Tomb of Ligeia. These were all stylish horror films, but only one of them was an out-and-out comedy and that was The Raven.

With a screenplay by Richard Matheson and delectable performances by the likes of Vincent Price, Peter Lorre, and Boris Karloff (along with a young Jack Nicholson and a fetching Hazel Court), audiences expecting a horror film instead got a horror comedy, with an emphasis on the latter. It didn't matter that the emphasis was on the latter, because audiences still flocked to see it.

Adding to the fun of The Raven is the delightful score of Les Baxter, who did several of the Corman/Poe films. Baxter uses electronics as well as conventional orchestra, and the result is a really fun and interesting score that just propels the film along its merry way. His eerie electronica for the opening narration of the Poe poem is really effective, and his music for the battle of the sorcerers is classic Baxter, as his exhilarating music for the wild ride to Scarabus' castle.

In 1970, AIP produced a low-budget hour-long TV show called An Evening Of Edgar Allan Poe, starring Vincent Price doing solo recitations of four Poe stories: "The Tell-Tale Heart," "The Sphinx," "The Cask Of Amontillado," and "The Pit and the Pendulum." Naturally, AIP turned to their favorite composer, Les Baxter, and he provided his usual excellent work and some of his most adventurous scoring—a little more atonal than he usually did, but some seriously great music. The show has a brief main and end title theme, and then four complete scores.

For this release, the first ever for this music, only one tape could be found, the second of two reels. However, it was a full reel and contained music from not only the second part of the film but several cues from the first part. Taking our cue from the popularity of the La La Land release of Baxter's score from X: The Man With The X-Ray Eyes, which was the same situation—one tape, partial score—we decided that some Raven was better than no Raven, especially as we actually had a lot of music from the film and unlike the partial score to X, none of it was source music. So, with close to twenty-five minutes of original score, it's actually a pretty good sampling of the film's music.

We also include several of the electronica cues as a bonus. The mono tape was in excellent shape. This music for An Evening Of Edgar Allan Poe was released on CD by Citadel—that release had shrill and unpleasant sound and was in some sort of phony stereo—for this release we present the score from its original mono tapes and in proper order, and include for the first time the main and end title, taken from the DVD release. This release is limited to 1000 copies only.