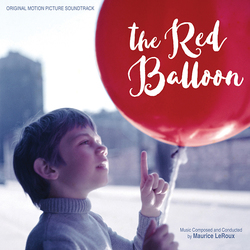 The music of The Red Balloon, which gives the film so much of its heart, was by Maurice LeRoux. Le Roux's score hits all of the film's emotional bases and does so simply, effectively, and beautifully. The film begins with his gorgeous, lyrical main theme, and the rest of the score musically tells this wonderful story brilliantly, whether playful (the balloon tormenting the headmaster of the school, the magical sequence of the red balloon flirting with a little girl's blue balloon), or tense when the bullies steal the balloon, and then the stunning sequence when all the balloons of Paris unite and find Pascal, and lift him into the skies for his joyous, exhilarating ride over the city.

The natural companion piece is, of course, Jean Prodromidčs' incredible score to Le Voyage en Ballon. A score filled with beautiful themes that, like the film itself, take flight, and it takes the listener on a musical journey that is truly breathtaking.

The Red Balloon is taken from acetates and has been restored by Chris Malone. Acetates are never going to sound like tape and are never optimal, but Chris did a great job and unless someone actually finds the tapes (if that hasn't happened in sixty years it's probably not going to happen anytime soon), this is as good as we're going to get. The score to Le Voyage en Ballon has been on CD a couple of times, but for this release, Chris Malone has done major work on it and it now sounds better than it ever has.