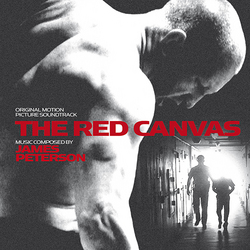 Already nominated for the Jerry Goldsmith Award at the V International Film Music Festival in Ůbeda, Spain, and the winner of the award for 'Best Feature Soundtrack' at the Action on Film International Film Festival, James Peterson's score for The Red Canvas will blow fans of big, orchestral movie music away!

A rarity in modern film music, this is a score that is inspired by the legendary Miklós Rózsa—Peterson masterfully writes very maturely for orchestra, with beautiful motifs, themes and counterpoint! Written for large orchestra with an emphasis on brass (eight french horns, six trombones, four trumpets, two tuba) and a large string section (60 pieces), the music is definitely a musical adrenaline fest (the +11 minute 'Ballet for Brawlers' is atosnishing)—but the score never loses its focus on emotion.

As a bonus, this CD (which is over 66 minutes in duration) features Peterson's eight part concert work 'Moving Images Suite', a delightful orchestral ode to film music. Enjoy!