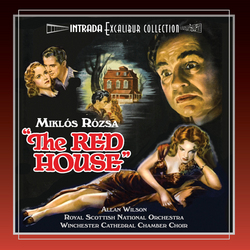 Intrada's latest release in its Excalibur Collection features the premiere of Miklos Rozsa's complete score to the 1947 film The Red House. The unique combination of the 1940s and the film-noir genre provided Rozsa with an opportunity to compose some of his most stunning film scores. The Red House is one of the greatest of these scores. Full of passion, action, and drama, the score has only previously been released in suite format.

Kevin Kaska reconstructed the entire score from scratch, ensuring strict adherence to Rozsa's original orchestrations and resulting in a CD of the complete score running over an hour. In all of Rozsa's extensive body of work, it is no exaggeration to state that this score contains some of the most compelling music he had ever composed and it is an honor for Intrada to announce this on what would been Rozsa's 105th birthday.

Starring Edward G. Robinson and based on the novel by George Agnew Chamberlain, the story tells of a crippled farmer who, after his daughter brings home a suitor, attempts to keep everyone from a mysterious red house located on his property. Of course, madness and murder prevail.