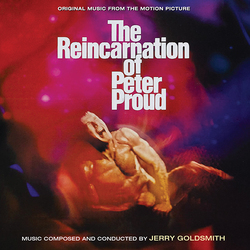 The Reincarnation of Peter Proud

Intrada announces the premiere release of Jerry Goldsmith's score for the 1975 thriller The Reincarnation of Peter Proud, one of the last and most sought after Goldsmith scores never previously released. The quest to find the music elements for this release was fraught with frustration and challenge, but ultimately netted discoveries that facilitated this release. The score itself revolves around a moody, elegiac, long-line melody, first played by chamber-sized orchestra and piano, with solo flute over the film's opening flashback scene of Jeff Curtis swimming in a lake at night only to encounter—and be killed by—his, wife, Marcia. Goldsmith combined his symphonic palette with a substantial array of electronics, laying the groundwork for his style in the following year's for Logan's Run. As Jeff Bond writes in his notes, "It's a score that...seems to bubble up out of the subconscious like a half-remembered dream, gradually sharpening its focus from echoplexed flutes and synthesizers to hard-edged, acoustic orchestral writing as the movie moves from Peter's world of memories and dreams into an ugly, inevitable reality."

The first half of the score (through "Home at Last") is mastered from a DAT copy of the original ˝" 3-channel stereo session mixes made by Armin Steiner and copied down to Ľ" tape at some point. The second half of the score was also taken from a DAT, this time transferred from mono tape sources at about the same time as the stereo mixes. To reduce the contrast between the stereo and mono tracks, Intrada mastered the latter with a judicious amount of state-of-the-art Altiverb to add a tiny amount of stereo "ambience."

In the film, sports-coat-wearing professor Peter Proud (Michael Sarrazin) leaves behind his increasingly frustrated girlfriend (Cornelia Sharpe) while tracing his reincarnation dream imagery to Massachusetts, eventually tracking down widowed Marcia Curtis (Margot Kidder) and her attractive daughter, Ann (Jennifer O'Neill). As Peter ingratiates himself with and then seduces Ann Curtis, Marcia—who killed her philandering husband Jeff (Tony Stephano) in 1946—is overcome with the suspicion that Peter is somehow connected to Jeff Curtis, and finds the combination of bitter hatred, jealousy and lust that drove her to kill her husband boiling up again.