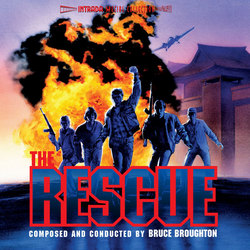 For the 1988 Touchstone film The Rescue, it was the film's ending—the big aerial finale—that sparked Bruce Broughton's imagination that led into the rest of the score. Broughton's main theme is a sprightly, patriotic melody, whose syncopated opening interval becomes the DNA of the score.

Broughton orchestrated the score for a medium-sized, traditional ensemble, along with some scattered Asian instruments, synthesizers, electric guitar, Fender Bass and rock percussion. The resulting palette tastefully blends contemporary pop elements with a Hollywood symphonic sound, with enough local flavor to acknowledge the film's setting and antagonists. It is a score immediately identifiable with the composer, filled with Broughton's trademark brass harmonies and orchestral flourishes.

The album was prepared from the two-track stereo scoring session mixes (preserved in perfect condition) made by Armin Steiner at Twentieth Century Fox Studios during February 1988. In addition to the score heard in the film, these complete masters also allowed Intrada to include Broughton's unused "Diving SEALS" and "News" cues, heard here for the first time.