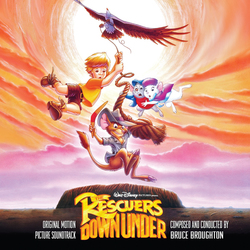 The Rescuers Down Under

Composer Bruce Broughton was brought in while the 1990 Walt Disney film The Rescuers Down Under was still being animated. He balanced the "Mickey-Mousing" approach to animation scoring with a more serious style akin to a live-action film, delivering a huge, thrilling orchestral adventure. The main ingredients of his score are a bouncing, heroic theme for the "rescuers" Bernard and Bianca; a softhearted love theme for the two; a teetering, diesel-fueled motif for the villain McLeach; and a soaring, swooping, near-spiritual theme for Marahute, the giant eagle. He propelled the latter into the stratosphere for the animation (and music) showcase early in the film when the eagle rescues Cody from a great fall.

In addition to the multicultural instruments that pepper his score reflecting the Australian setting of the film, Broughton also featured the foreign tones of the EVI (electronic valve instrument)—a wind-powered synthesizer created by Nyle Steiner, who performed on the recording. Among other things, the EVI supplies a kind of birdsong for Marahute in places, and in others it gives Bernard and Bianca's love theme a sweet vulnerability.

This new Intrada CD greatly expands on the original 35-minute program released by Walt Disney Records in 1990 and premieres some 38 minutes of previously unavailable music. Among the many new selections are the darker, more aggressive cues scored for the villain, McLeach, that were mostly absent from the earlier album, providing a much more dramatic range of music than before. The entire CD has been newly assembled and mastered from the original digital two-track session mixes.