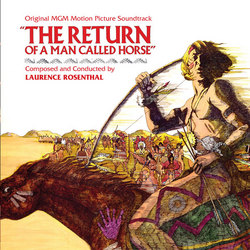 The Return of a Man Called Horse / Inherit the Wind

In 1976 Laurence Rosenthal presented another of his landmark scores for the United Artists film, The Return of a Man Called Horse. There is much to admire in this score: the fierce percussive music for the opening massacre, the harrowing intensity of the scenes surrounding the Sun Vow ritual, and the jovial theme that is introduced in the gift-giving scene. Taken as a whole, the score pulses with a vibrancy that is remarkable even by Rosenthal's standards. But the centerpiece is unquestionably the film's powerful main theme. As the composer details in his preface to the album, this melody expertly combines the formative influences of Morgan's life: the elegance and refinement of old Europe, the majestic vistas of the Great Plains, and the inner mysticism of the Lakota Sioux.

Being such essential Rosenthal, Intrada embarked on a full restoration of the score, remixing the entire score from the 24-track elements stored at MGM and presenting this greatly expanded edition. Flowing over 2-CDs, but not long enough to fill out the second CD, Intrada includes as an added bonus his score to the 1999 television adaptation of Inherit the Wind. Coming more than two decades after scoring The Return of a Man Called Horse, Rosenthal was called upon to provide music for a very different cross-section of American history: a fictionalized account of the landmark 1925 Scopes Monkey Trial.

Though the score features a reasonably sized orchestra, Rosenthal maintains an intimate feel, often emphasizing small-group writing for individual instrument families. He develops the material with an eye toward illuminating the relationships between characters. Rachel and Bert receive a delicate romantic theme, which becomes anguished during her mid-trial crisis of confidence. Another lovely melody accompanies the scenes of tenderness between Brady and his wife. But there is also warm and inviting material for scenes between Brady and Drummond, where Rosenthal skillfully conveys the history of genuine affection and even friendship that exists between these ideological opposites.

Inherit the Wind is not a lengthy score, coming in at less than thirty minutes of music. Furthermore, several passages were dialed out of the film mix, making this album (sourced directly from the digital 2-track session mixes) the first time Rosenthal's work can be heard in its complete form.