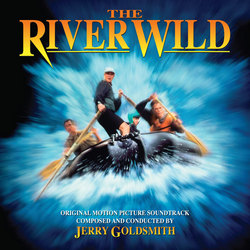 For The River Wild, the decision as to just what music would be heard was a challenging issue for the filmmakers. Composer Maurice Jarre was hired to record a lengthy, large-scale symphonic score in June 1994. The score is on a massive, epic scale, focusing on the grand outdoor adventure—the majesty of nature itself—and later the thrills as the tale progressively gets darker. The action material speaks to the conflict between that natural power and Gail's determination to conquer it. This approach apparently did not work for the filmmakers.

Jerry Goldsmith was then brought in and recorded a score in August, taking a much gentler approach, featuring a main theme that speaks to the serenity Gail finds in nature and her enjoyment in navigating its waters. This transparent theme is typically heard on solo flute or trumpet and is based on the folksong, "The Water Is Wide." Where Jarre avoids using that familiar tune until the end of his score, Goldsmith anchors his entire score with it. Where Jarre works variants of his original main theme to focus on the action and hits hard with dissonant brass figures, Goldsmith moves away from the traditional melody he started with and instead creates an entirely new secondary theme for the river rafting sequences, an imposing minor-key idea that assumes prominence as the action unfolds. For the action sequences, Goldsmith opts for rhythmic intensity over dissonance.

And yet for the lengthy action set-piece where Gail successfully negotiates the deadly gauntlet as well as the equally lethal villains, both composers feature a plethora of energetic, jagged brass rhythms over massive blocks of percussion. Ultimately, both scores are musically riveting and worthy of the showcase Intrada presents on this 2-CD set. This new release features the complete scores from the masters housed at Universal that not only include the complete scores, but the numerous rewrites for both scores as the filmmakers honed in on the approach for which they were looking.