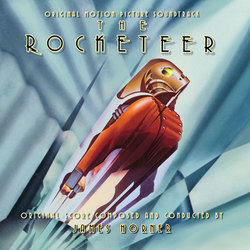 Intrada presents an expanded edition of one of James Horner's most beloved scores, the 1991 Hollywood Pictures film, The Rocketeer. The score is particularly fitting because it embodies his passion for flying. But few films were about flight, at their core, the way The Rocketeer is, and Horner seized the opportunity to pen a musical love letter to his muse. He composed one of his most straightforwardly leitmotif-laden scores, with a main theme featuring two distinct personalities: one a calm, majestic melody, lovingly introduced over the film's main titles; the other with a rocket pack strapped to it, ushered into service for action sequences.

Horner wrote two other major leitmotifs: a pining, damsel-in-distress theme for Jenny, and a simple, slithering line for Neville Sinclair. The latter is a slice of uncomplicated menace, usually crawling upward on a solo woodwind or brass instrument. The former is a vintage love theme, oozing old Hollywood. Passion, wavering loyalties and danger are all cooked into Jenny's theme, which Horner cleverly braids into the Rocketeer theme or Sinclair's slimy motif as the story demands.

For this important new presentation of Horner's dynamic score(including over 20 minutes of music not previously released), Intrada was given access to the complete scoring sessions captured on Sony PCM 3348 format 48-channel digital tape and mixed by Shawn Murphy to digital two-track stereo. We feature the entire 82-minute film soundtrack on CD 1 and the first part of CD 2. Following that, we present the original 1991 CD with its remixed album versions and various differences. After creating their film mixes, Horner and Murphy created several special album remixes. The remixes often spotlighted instrumental colors in ways that were different from the film versions, depending on what Horner was most interested in focusing on between the two mediums. In addition, knowing an album was planned, he composed and recorded a fully developed version of the love theme specifically for the CD, slated simply as "Love Theme" in the sessions and titled "Jenny" on the album.