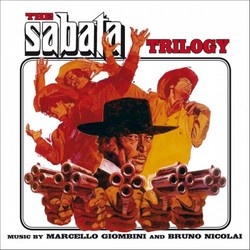 Deluxe 3-CD set containing remastered reissues of the out-of-print and hard-to-find scores from the Sabata films—three of the most iconic European westerns!

The Sabata Trilogy is a series of spaghetti westerns directed by Gianfranco Parolini and released between 1969 and 1971. Lee Van Cleef starred in the first, Yul Brynner in the second, and Van Cleef returned for the third.

Marcello Giombini's scores for the two Van Cleef films feature one of the most celebrated leitmotivs of the genre. The great Bruno Nicolai composed the score for the second film—in a style more dramatic and epic than Giombini's; it is considered one of the great masterpieces of Italian western music.

The first Sabata score was previously released with 19 tracks in 2001 by GDM, along with a 20-minute selection from the third movie. Both scores were released separately in Japan in 2008 with the most complete presentation. The complete Nicolai score was also released for the first time on CD in 2001 by GMD, and reissued with the same content in Japan. All these releases went quickly out-of-print and became very expensive in the secondary market, so it is a pleasure to present again the complete original scores for this famous trilogy, fully remastered by Claudio Fuiano from the first-generation master tapes.