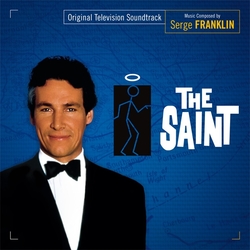 Music Box Records presents a 3-CD selection of music from the 1989 revival of The Saint, composed by Serge Franklin.

Franklin was hired to write the score and he delivers three exciting, action-filled scores all held together by an infectious, sax-based main theme which emphasizes Simon's new globetrotting lifestyle. The three episodes each have their own special flavor from the large-scale pilot scoring (The Brazilian Connection) through classically infused high society intrigue (The Blue Dulac) to more contemporary rock guitars for industrial espionage (The Big Bang). The show also includes a special Easter egg—Leslie Charteris had his own theme for The Saint which appeared in all incarnations before and Franklin was specifically asked by the author to hide the motive somewhere in the show. The request was so polite the composer simply couldn't refuse. Can you find it?

Based on the composer's own set of tapes, the selection includes three complete episode scores: The Brazilian Connection, The Blue Dulac and The Big Bang. The music for The Software Murders could not be located, while the remaining two scores were written by different composers and hence are omitted as well - but the three complete scores should satisfy every fan of espionage retro.

The 3 CDs feature 140 minutes of music in total. The 8-page booklet includes liner notes by Gergely Hubai discussing the character, the show and the music based on a new interview with Serge Franklin.