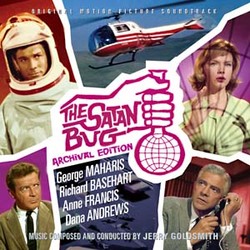 Long have I read great praise for this score, its unavailability to be preserved on disc and how much it bolsters the average film it accompanies. Now, thanks to Film Score Monthly I can finally hear Goldsmith\'s unique contribution from start to finish, but also thanks to Turner Classic Movies I can enjoy The Satan Bug as complete movie. As is often the case with the deluxe editions released by FSM, the liner notes are so in-depth and insightful that I can hardly much new information, except my own personal response to the score.

The "Main Title" marvelously sums up the unflinching, invisible danger of the titular virus, by way of rising, dissonant brass and woodwinds chords trading the stage with an arcing, striking tune heard on xylophone, all playing out through a serial tone row. This instrumentation plus that of clacking, dry percussion and churning double basses present an unnerving yet hypnotic opening for the film and score. In the muted coda, while we follow a vehicle driving through the Southwest desert, approaching an isolated science research station, the brief Satan Bug motif is first heard, which has a vaguely exotic flourish.

For much of the first half, suspense is key as the characters try to piece together how, why and who swiped the deadly virus from the lab. The Satan Bug motif is presented in a variety of guises, while an alternating ostinato sneaks forth - a panicked, rising figure, most often heard on Hammond Solovox but also passed to other sections of the orchestra, representing the criminals and the virus carried in a flask. In a way, the exotic Satan Bug motif could be said to actually represent the terror of total annihilation while the ascending ostinato colors the contained virus and those who seek to possess it.

"The Getaway" is the lengthiest track on the album and becomes the turning point in the score, as its action beats open the gates for more to follow since the psychotic mastermind has finally been identified and the film shifts from investigation to full-on pursuit. It and subsequent cues "Instant Death", "Road Block" and "Bail Out" feature riveting, punchy brass, percussion and xylophone riffs, amid colorful statements of established motifs. It is interesting to compare The Satan Bug to other scores composed the same year by Goldsmith, such as Morituri, Von Ryan\'s Express and early episodes of The Man from U.N.C.L.E. television series. In each there is to be found similar instrumentation such as bongos, the Solovox synth, terse percussion, dissonant brass and also rhythms that seem to swing in a jazzy fashion appropriate to the period but are of course endemic to Goldsmith\'s approach to action. During his long career as film composer, these rhythms have helped Goldsmith put infectious pace to scenes in which not much actually occurs, as evidenced during the initial investigative portion of The Satan Bug.

I must assume that frequent readers of this and other film score sites are aware of the difficulty FSM had in preparing this album, i.e. lost or destroyed master tapes, followed by a discovery of select reels containing around 30 minutes of music in clean stereo while the remaining cues include sound FX. There has been much discussion on this issue by many fans, pro and con, arguing that at least the music is preserved on disc while others note that it is in tainted form, not pure music. We all know that the score must support the film, but I happen to be of the opinion that once it is on that grooved LP or shiny CD it can be judged as a separate listening experience. So while the tracks including sound FX feature fantastic, kinetic Goldsmith muscle, they function more as a way to study how effectively he wove his magic in and out of the film\'s action than as purely a listening experience. That being said, Goldsmith albums are almost always great listening experiences and due to his talent for giving each cue its own focus and structure while still being threaded into the overall tapestry of the score, The Satan Bug as presented by FSM is a welcome, worthwhile and unique release for devoted fans of the composer.