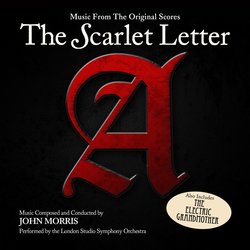 The Scarlet Letter / The Electric Grandmother

The Scarlet Letter was a four part mini-series production of Nathaniel Hawthorne's historical novel helmed by director/producer Rick Hauser. The production starred Meg Foster as Hester Prynne, John Heard as Reverend Dimmesdale, and Kevin Conway as Chillingworth. The Scarlet Letter tells the story of Hester Prynne, a Colonial Boston woman who had lived two hundred years earlier, and a scarlet piece of cloth elaborately embroidered with the letter 'A'. In her husband's absence, Hester takes a secret lover and has a child by him. Accused of adultery, Hester is imprisoned. Refusing to identify the father of the child, her shame and despair continue and her isolation grows as the townspeople see her as a symbol of sin in their pious community. Unknown to them, the father is Reverend Arthur Dimmesdale, who must grapple with his indecision over revealing himself and his indiscretions.

Airing on public television in 1979, this version of The Scarlet Letter was considered the most faithful adaptation of Hawthorne's novel at the time. Extensive research and detailed production design also made this one of the most accurate filmic depictions of 17th Century colonial America. Hauser's use of visual symbolism from the original text and the inclusion of the author as a narrator were highlights, and a lush orchestral score by John Morris gave the series a big budget feel. For The Scarlet Letter, Morris used the 76-piece London Studio Symphony Orchestra and recorded at the CTS Recording Studios in London over three days in January of 1979.

Airing in 1982 as a television special on NBC, The Electric Grandmother was a retelling of a Ray Bradbury story. Maureen Stapleton stars as the kindly robotic granny who uplifts three children after the death of their mother. Edward Herrmann plays their father and Paul Benedict plays the bemused robot-maker Fantoccini. The Electric Grandmother was well-received, having won a prestigious Peabody Award and an Emmy nomination in the category of "Outstanding Children's Program", while 10-year old Tara Kennedy (in her only film role) was nominated for a "Young Artist Award" in the "Best Young Actress in a Movie Made for Television" category. John Morris composed the music for The Electric Grandmother a year before composing The Scarlet Letter, and fresh from his feature film scores for The Elephant Man (1980) and Mel Brooks' History of the World Part I (1981). The score is based on two recurring themes: the dominant and quite cheerful "Electric Grandmother" melody for the family as a whole, and the tender, sentimental "Grandmother Lullaby" tune.

While The Scarlet Letter was previously released on compact disc in 1995, The Electric Grandmother has never been seen a release. Dragon's Domain Records is excited to bring The Scarlet Letter back to the marketplace along with the world premiere release of the composer's music for The Electric Grandmother, mastered by James Nelson at Digital Outland with liner notes by author Randall D. Larson.