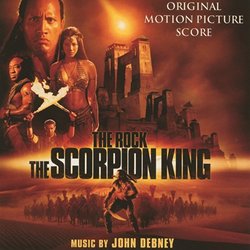 After the phenomenal success of The Mummy, a sequel was developed, which eventually became The Mummy Returns.  In that film, The Rock had a small role as The Scorpion King, and a spin-off was planned - before the sequel even came out.  Suffice it to say, The Mummy Returns was a box-office success, and The Scorpion King went forward, with director Chuck Russell (The Mask, Eraser) at the helm.  While the store was more like a Conan movie than the style Stephen Sommers set forth in The Mummy, The Scorpion King knew that its target audience was different, given that its lead star was a rather popular pro-wrestler.  Composer John Debney and the producers focused on that audience demographic, giving us a swashbuckling score of epic size and proportions, with just the right blend of hard-rock to make every wrestling fan feel right at home.

The opening track, "Boo!" is geared for just that fan.  Electric guitars and a hard rock groove kick off the CD, but the album quickly turns towards the large orchestral sound that Debney does so well.  People hoping for something on the scale of Cutthroat Island will not be disappointed; the "Main Titles" feature a big choir and dramatic brass with plenty of percussion.  There are softer moments in the score, from the ethnic sounds of "Visions of Doom" to the whimsical meandering in "Pickpockets", and even a bit of romance in "I Had A Vision".

But it is really the action that makes this score great, and there is no shortage of it here. Beginning with "Valley of the Dead", your heart will start to pick up the page.  You think you have a bit of a break with "The Cave" and "Mathyus Arises", but the tension is really just starting to increase.  "Balthazar's Camp" is a searing action cue running a little over 5-minutes in length, and Debney gives the orchestra a bit of a workout - but it's just a hint of things to come.  Three cues in a row provide unending action: "I've Come For The Woman", "Die Well Assassin", and "Balthazar Arrives".  It's a solid ten minutes of action that will literally wear you out, so keep the lemonade handy.  Wrapping off the album is the denouement in "The Scorpion King", a rather upbeat and uplifting cue that belies the truth about that character that we find out in The Mummy Returns.

Running about 40-minutes in length, there is plenty of music here to satisfy the average soundtrack listener, although some Debney fans will no doubt be wondering where the remaining music is.  Still, this one makes a fine companion piece to Debney's other works, and any fan of big orchestral action (and some hard rock) will be sure to enjoy it.