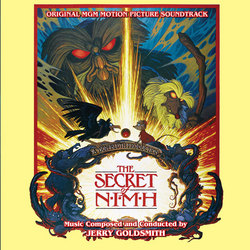 The Secret of NIMH

The original album composer Jerry Goldsmith prepared for The Secret of NIMH in 1982 featured 12 tracks and ran a generous 48 minutes, covering almost all of the score's major sequences. When Intrada set out to do an expanded and remastered edition, the complete recording sessions proved to be allusive. Missing elements are not uncommon in this business of soundtrack archaeology, but this one was a painful near miss.

A deep search uncovered the first-generation, DBX-encoded 1982 album master assembled by Goldsmith and engineer Len Engel, as well as three rolls of 1″ 8-channel and one of three 1/2″ 3-channel tapes. While these didn't reveal every sequence of Goldsmith's magnificent score, they did contain one missing cue—"At Your Service." If only one cue of the unreleased material was to surface, this is the one to have. It accompanies the sequence when Mrs. Brisby first journeys into the lair of the intelligent rats.

Additionally the elements revealed a complete "demo" version of the end-credit song performed by Sally Stevens and the orchestra. The latter is identical to the film recording with the exception of the temporary orchestra mix and levels, which largely yielded to the vocal for later balancing purposes.

Goldsmith took the scoring assignment under the condition that he could score it like a live-action film. The score features as many as eight different themes for the film's major characters and situations.