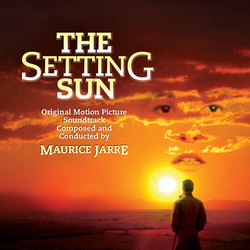 Maurice Jarre scored The Setting Sun as an epic musical tapestry depicting events leading into WWII and Japan's pending invasion of Manchuria. He wrote a large-scale, lavishly percussive and florid orchestral work, featuring both grand and tender themes. The orchestration included additional winds and brass, harps, pianos and other keyboards, a synthesizer and other electronics such as the EWI and EVI (Electronic Wind Instrument and Electronic Valve Instrument), played by Judd Miller and Nyle Steiner, the inventor of the instruments. The massive forces of the percussion ensemble included seven percussionists covering orchestral timpani, two large bass drums and a range of double-sided Japanese drums—two taiko, one odaiko, and a da-daiko— which often played in unison.

Jarre scored The Setting Sun with his customary musical continuity, allowing Intrada to construct the album by fashioning the shorter cues into lengthy, cohesive set-pieces that followed the overall picture narrative while playing as musically complete "movements" unto themselves, just as Jarre would have done. The score was recorded at Royce Hall on the University of Southern California campus and subsequently mixed by Shawn Murphy at Sony Pictures Studios. The digital masters survived in pristine condition.