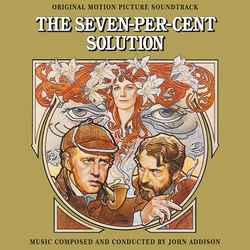 Quartet Records and Universal Pictures present the world premiere release of the exciting, charming, classy score composed by John Addison for this unusual film directed by Herbert Ross. Written by Nicholas Meyer and based on his own novel, the film posits a meet-up between Sherlock Holmes and Sigmund Freud, who while trying to cure the famous detective's cocaine addiction, becomes involved - along with Dr. Watson - in a most mysterious case. The film stars Nicol Williamson, Robert Duvall, Alan Arkin, Vanessa Redgrave, Laurence Olivier, Joel Grey and Samantha Eggar.

Addison's score for The Seven-Per-Cent Solution uses elements of pastiche but integrates them easily into his own distinctive voice. Principal themes include a sinuous and harmonically ambiguous idea for Holmes; a lush, romantic theme for Vanessa Redgrave's character; a Spanish-flavored theme; and, for action scenes, an irrepressible Hungarian czardas. The album also includes the premiere release of a song written by Stephen Sondheim specifically for the film.

John Addison himself prepared an album in 1976, which contained different mixes and edits in some cues for a better listening experience. Although the album was eventually aborted, a private LP produced by Tony Thomas circulated among afficionados. Because this score has been so often requested by fans, for this premiere release we have used all the elements vaulted at Universal, presenting on 2 CDs the score as it was conceived for the film, as well as a generous section of alternates and additional music. We have also included the mock-up album program for its historical value. The entire collection has been painstakingly remixed, restored, assembled and mastered by Mike Matessino. The package includes a 20-page booklet with in-depth liner notes by Frank DeWald and a brief note, written expressly for this release, by Nicholas Meyer.