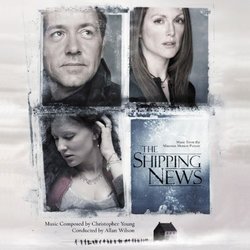 The Shipping News, directed by Lasse Hallstrom and based on the Pulitzer Prize-winning book by E. Annie Proulx, can only be described as an extraordinary punt by extraordinarily talented people.  Sadly, despite the Golden Globe nomination, the soundtrack follows the same path to mediocrity.

Proulx's book is a dark tale of the redemption of a less-than-bright man who moves to Newfoundland to reclaim his heritage; the book is written in a crisp, witty style that makes the dark not seem so dark, and somehow still manages to be sympathetic and, ultimately, heartwarming.   The filmmaker certainly can and should make the movie its own work, but what happens in the translation here is that all the wit and humor is sucked out and all that is left is this dark, lethargic mass of despair that few would enjoy watching.  The array of exquisite actors, i.e. Kevin Spacey, Judi Dench, and Julianne Moore, are stuck doing limited performances in limited roles.  Similarly, the grey yet beautiful land of Newfoundland is entirely short-changed by Hallstrom, who chooses to make it a pit of darkness as opposed to a surprising well of redemption.

The soundtrack by Christopher Young wisely draws on Newfoundland's rich Irish music heritage, and the result is certainly not bad; it is simply unexceptional.  Young does incorporate some affective motifs, but they are only effective in making us feel more lugubrious.  Mood and atmosphere is where this score works best; we do get a sense of a dark place with dark secrets.

What we do not get is a score with a rich emotional thread.  Hallstrom, who has directed some of the more interesting films of the past ten years, has surprisingly done virtually nothing with these characters to make them intriguing.  Young desperately needed to add rich emotional threads to the piece to draw us in, even a little.  This does not happen and the music comes off as very general and uninspired.

Basically, if you really like Irish music, this soundtrack has a few nice pieces that will work for you, but they are couched in some pretty standard Hollywood music.  Outside of that group, not many folks would be interested in this soundtrack.  It doesn't really make you feel a connection to the film or its characters or give you any strong visceral boost.