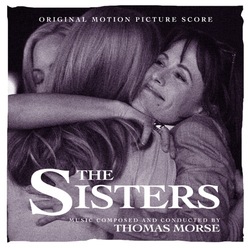 It may be unfair and downright bizarre for me to compare Thomas Morse\'s score to The Sisters to John Powell\'s X-Men: The Last Stand, but I do it to make a point. Silence is music, and Morse knows it. Soundtracks to both The Sisters and the third X-Men movie were released around the same time and, while Powell\'s overbearing action music never lets go with the steel pounding and the fluttering of flutes, it is a relief to find that there are composers out there who value the musical impact of silence.

The Sisters is a modern adaptation of Chekov\'s Three Sisters play which reunites three sisters following the death of their father. The score is a minor-key affair for predominant strings and occasional harp, piano, and solo woodwinds. While themes can be heard in the 37-minute iTunes exclusive release, the emphasis is clearly on Morse\'s harmonic writing, which is strong without being caricature, emotional without being schmaltzy. The gravest mistake any composer can make on a score like this one is to layer the strings too thick and bombard the listener with loud, eye-watering, over-the-top romantic string chords. Morse knows better and crafts subtler harmonies that are frequently broken up by pauses and silences, allowing the characters to speak a word or two and giving us time to breathe. The sound of the score is definitely more European than American, giving precedence to grave celli, earthy violas, and dramatic violins.

While the harmonic writing in Morse\'s score is strong and mature, The Sisters is definitely a "mood" score, not in the sense that it loses itself in bare-bones atmospheric pieces, but in the sense that one has to be in a specific mood to enjoy its sad and seemingly never-ending passages of tormented strings and bereaved oboes. As such, and because of its strict adherence to traditional rules of musical dramas, it might gain better respect from a smaller group of people who can appreciate its Classical inclinations and the richness of its harmonies. Morse demonstrates maturity if not a wholly original voice in this effort and the album\'s release by brand-new Movie Score Media will be a welcome addition to the more conventional film music fan.