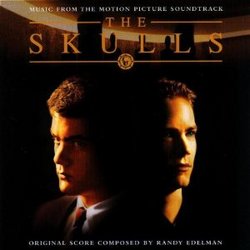 Composer Randy Edelman and Director Rob Cohen have had a rather productive relationship. They worked together on such films as Dragon: The Bruce Lee Story and Dragonheart. While Daylight didn't do so well, they have now reunited for the "secret society" thriller, The Skulls. The film focuses on college student Luke McNamara (Joshua Jackson) and his acceptance into the secret society known as "The Skulls", and the eventual discovery of the truth behind the death of his best friend. (Here's a hint - they're all related!) The film was enjoyable to watch, and while it certainly wasn't a very good movie, it was good enough to recommend as a matinee. The music in the film tended to be just a hair loud at times - almost overwhelming the emotion of any given scene - and while there are a few good themes, they sounded a bit synthetic and overused. I actually left the film disappointed in Randy Edelman's work. I know he's done better (and I know he'll do better), and I was just hoping for more than what I was given.

The album begins with the dramatic piano rendition of the main theme ("The Skulls"), and is a rather nice theme that hints of danger while still maintaining a hopeful quality. Unfortunately, sometimes a good thing can be overdone, and we get to hear this theme played again ("Will's Funeral") and again ("Watch Me"), and again ("Reprise") and a few other times as well. All of them are enjoyable to listen to (on their own), but played through the album it seems to be bordering on the repetitiveness of Escape From New York.

Another theme, which sounds a lot more like something Edelman might have written in between Dragon and Dragonheart can be heard most notably in "The Race". A really uplifting cue, it was interesting to hear in the film because it felt as if it were more excited about the crew race in the film than the film made it out to be. There just wasn't that much energy or tension at that point in the film, and the score seemed to stand out as a bit over-the-top for that sequence. Had the race been more interesting, the cue would have worked perfectly.

Towards the end of the film, at the point where "The Duel" is played (yes, for a duel), the music once again seemed more in-your-face and intrusive than it really should have been. The pounding timpani drums and fierce string octaves seem to be a bit of overkill for the scene. We know it's supposed to be tense (and parts of it are), but the loud music just doesn't seem to work for that type of situation. Other parts in the score do, however, work out just fine. The somber music in "For A Friend" is touching and moving, and showcases Edelman at his best.

Some parts of the score sound a bit synthesized - and I couldn't find any indicator of a music contractor in the liner notes. I wonder if that was the intended effect, because it gets a bit distracting when you hear those higher notes - sometimes they're so obviously synth. This is a score that could have benefited from some real orchestra sounds.

There are also a few songs on the album that I'll admit not to noticing in the film. I'm sure they were there somewhere, perhaps even tucked away in the end credit sequence. "Falling", performed by Eman, is pretty good, and Lorna Vallings' "Taste" has a slinky kind of evilness to it that I actually enjoyed. This album runs about 51 minutes long, and might be worth picking up for a few of the themes, but the synth element might give one pause. In that case, I would have to suggest Dragon: The Bruce Lee Story and Dragonheart - two excellent Randy Edelman/Rob Cohen soundtracks.