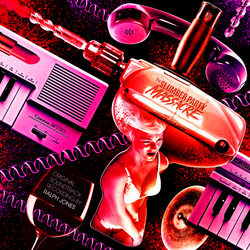 Death Waltz Recording Company would like to extend to you a very special invitation: a first-class ticket to The Slumber Party Massacre and its energetic electronic soundscape. Ridiculed on release but later celebrated by some as a feminist parody of slasher films, the picture is fueled by Ralph Jones' synth score that remembers the first rule of comedy: never let the audience know you're in on the joke. Away from the film, the music retains a sense of wit and playfulness amidst the tension that makes it a riot to listen to.

Jones' score wears its influences on its sleeve, with nods to the giants of the world of musical horror—Jaws and Halloween—as well as a more gothic sensibility, with parts sounding like they should come from an electric organ in an ancient cathedral. He ramps up the tension using rhythmic pulses and atmospheric electric piano, with shrill background parts that sound like a field full of electronic crickets. And his talent for creating catchy melodies is certainly demonstrated here, with not only upbeat and bouncy tones but also haunting motifs that make you uncomfortable with the greatest of ease. Another synth spectacular that will guarantee you have a great time, whether you're slumbering, partying, or massacring.

Get an exclusive download of the full score when you purchase this album through the Death Waltz Webstore.