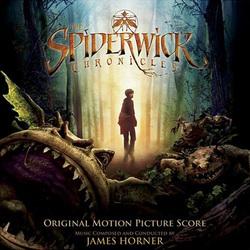 James Horner is known for his lush scores and the The Spiderwick Chronicles is full of lush arranging though restrained for the most part. The film and the books are about family coming together in a mystical setting, namely the Spiderwick Estate. Though essentially just a run down old mansion, it\'s the creatures that inhabit the forest and the house itself that lend to the story and propel it along, as well as give character to the scoring.

The initial track \"Writing the Chronicles\", is a good introduction to get the ball rolling, I consider the track much like an overture to the rest of the album, various fragments can be heard within the piece. With a first listen of this album I thought to myself, this is almost clichéd family film scoring, something I would expect to hear from a film scored by John Williams or Howard Shore, but not Horner. Am I disappointed? Not really, consider this if you must, contemporary scoring has a good chunk of stuff you don\'t catch on first listens. Same thing goes for Romantic period symphonic pieces as well. The Spiderwick Chronicles is a coin with more than just two sides.

The bi-polar side of the album can be seen clearly on \"Thimbletack and the Goblins\" with its first half being rather playful in nature and the rest consisting of a much darker quality, given its title once can see how Thimbletack and the goblins are viewed, one light-hearted for the most part and the other a darker energy feeding on the evils of an ever-increasing dismal world below the surface.

Fast pace scoring can be heard in \"Dark Armies from the Forest Attack\" with a steady paced rhythm, specifically in the strings section that covers a lot of scoring ground, and before you realize it, the track is almost a third of the way over. Percussion wise, \"Dark Armies from the Forest Attack\" reminds me of \"The Battle of Stirling\" from Horner\'s acclaimed score for Braveheart, dark and foreboding.

Personally the best track of the whole album has to be \"Flight of the Griffin\". This track is the side of Horner we all love, both melodic, brassy, triumphant, and down right a joy to listen to. After a solid week of continual listening, this track was the one I came back to over and over again. I feel it is the track that best represents this album as a collective. It has such wonderful string and brass work, with humor turns but the high wood winds.

You know Horner wrote it by the use of orchestral bells at their finest. This I think is a defining characteristic of Horner\'s and one that I enjoy immensely. He just seems to have a knack for writing uplifting yet at the same time dark pieces for the bells. And though the flight of the griffin is triumphant is ends on a rather sad note, no pun intended, but given the pace of the movie and the books its the perfect music for the scene.

For the movie this is a great score, it fits right in with the movie, and even the books, having read them I could tell from each piece of music what part of the books they were in and how it played out and Horner really did do this film justice, but was that ever in question? The composer was nominated for nine oscars winning two. Is this score worth the listen, sure, would I buy it, probably not, I would just borrow it from a buddy if I wanted to hear it more than twice.